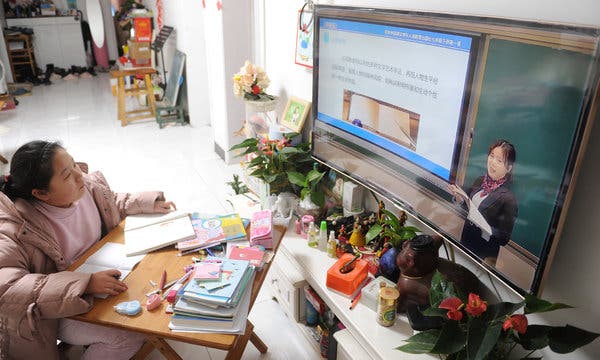 A student attending an online class at home in Fuyang, China, on Monday.  Credit…China Daily/Reuters

The coronavirus epidemic is reaching deeper into daily life across the world as governments decide that it is necessary to close their schools. Yesterday,  all schools in Italy were closed and the United Nations estimates that  nearly 300 million students globally are not attending due to fears of spreading the coronavirus.  The global scale and speed of the educational disruption from the coronavirus epidemic is “unparalleled,” the United Nations said.  Furthermore, school closures are not only disrupting the families but also all of the service providers and suppliers who support school operations.  Here is an excerpt from an article that appears in today’s New York Times.

“Only a few weeks ago, China, where the outbreak began, was the only country to suspend classes. But the virus has spread so quickly that by Wednesday, 22 countries on three continents had announced school closures of varying degrees, leading the United Nations to warn that “the global scale and speed of the current educational disruption is unparalleled.”

Students are now out of school in South Korea, Iran, Japan, France, Pakistan and elsewhere — some for only a few days, others for weeks on end. In Italy, suffering one of the deadliest outbreaks outside China, officials said Wednesday that they would extend school closures beyond the north, where the government has imposed a lockdown on several towns, to the entire nation. All schools and universities will remain closed until March 15, officials said.

On the West Coast of the United States, the region with the most American infections so far, Los Angeles declared a state of emergency on Wednesday, advising parents to steel themselves for school closures in the nation’s second-largest public school district. Washington State, which has reported at least 10 deaths from the outbreak, has closed some schools, while on the other side of the country in New York, newly diagnosed cases have led to the closure of several schools as well.

The speed and scale of the educational tumult — which now affects 290.5 million students worldwide, the United Nations says — has little parallel in modern history, educators and economists contend. Schools provide structure and support for families, communities and entire economies. The effect of closing them for days, weeks and sometimes even months could have untold repercussions for children and societies at large.

“They’re always saying, ‘When can we go out to play? When can we go to school?’” said Gao Mengxian, a security guard in Hong Kong whose two daughters have been stuck at home because school has been suspended since January.

“I don’t have data to offer, but can’t think of any instances in modern times where advanced economies shut down schools nationally for prolonged periods of time,” said Jacob Kirkegaard, a senior fellow at the Peterson Institute for International Economics in Washington.

In Hong Kong, families like Ms. Gao’s have struggled to maintain some semblance of normalcy.

…School and government officials have sought to keep children learning — and occupied — at home. The Italian government created a web page to give teachers access to videoconference tools and ready-made lesson plans. Mongolian television stations are airing classes. Iran’s government has made all children’s internet content free.

Students even take online physical education: At least one school in Hong Kong requires students — in gym uniform — to follow along as an instructor demonstrates push-ups onscreen. Each student’s webcam provides proof.

The offline reality, though, is challenging. Technological hurdles and unavoidable distractions pop up when children and teenagers are left to their own devices — literally.

Thira Pang, a 17-year-old high school student in Hong Kong, has been repeatedly late for class because her internet connection is slow. She now logs on 15 minutes early.

“It’s just a bit of luck to see whether you can get in,” she said.

The new classroom at home poses greater problems for younger students, and their older caregivers. Ruby Tan, a teacher in Chongqing, a city in southwestern China that suspended school last month, said many grandparents were helping with child care so that the parents can go to work. But the grandparents do not always know the technology.

“They don’t have any way of supervising the children’s learning, and instead let them develop bad habits of not being able to focus during study time,” Ms. Tan said.

Some interruptions are unavoidable. Posts on Chinese social media show teachers and students climbing onto rooftops or hovering outside neighbors’ homes in search of a stronger internet signal. One family in Inner Mongolia packed up its yurt and migrated elsewhere in the grasslands for a better web connection, a Chinese magazine reported.

…With the closings, families must rethink how they support themselves and split household responsibilities. The burden has fallen particularly hard on women, who across the world are still largely responsible for child care.

Babysitters are in short supply or leery of taking children from hard-hit regions.

The 11-year-old son of Lee Seong-yeon, a health information manager at a hospital in Seoul, South Korea, has been out of class since the government suspended schools nationwide on Monday. South Korea has the highest number of coronavirus cases outside China.

Working from home was never an option for Ms. Lee: She and her husband, also a hospital employee, have more work duties than ever. So Ms. Lee’s son spends each weekday alone, eating lunchboxes of sausage and kimchi fried rice premade by Ms. Lee.

“I think I would have quit my job if my son were younger, because I wouldn’t have been able to leave him alone at home,” Ms. Lee said.

Still, she feels her career will suffer. “I try to get off work at 6 p.m. sharp, even when others at the office are still at their desks, and I run home to my son and make him dinner,” she said. “So I know there is no way I am ever going to be acknowledged for my career at work.”

For mothers with few safety nets, options are even more limited.

…The epidemic has shaken entire industries that rely on the rituals of students in school and parents at work.

School administrators in Japan, surprised by the abrupt decision to close schools, have rushed to cancel orders for cafeteria lunches, stranding suppliers with unwanted groceries and temporarily unneeded employees.

Kazuo Tanaka, deputy director of the Yachimata School Lunch Center in central Japan, said it scrapped orders for ingredients to make about 5,000 lunches for 13 schools. It would cost the center about 20 million yen, nearly $200,000, each month that school was out, he said.

To blunt the effects, Japan’s government is offering financial help to parents, small businesses and health care providers. But school lunch officials said they had not heard about compensation for their workers.In Hong Kong, many among its sizable population of domestic helpers have been jobless as affluent parents have enrolled children overseas.

Demand for nannies had already dropped by a third when the outbreak began, because many companies allowed parents to work from home, said Felix Choi, the director of Babysitter.hk, a nanny service. Now some expatriate families have left the city rather than wait out the closings.

“Over 30 percent of our client base is Western expat families, and I’m not seeing many of them coming back to Hong Kong at this moment,” Mr. Choi said. “Most of them informed us they will only come back after school restarts.”

I fear this is still only the beginning of the coronavirus spread. The Associated Press has an article entitled, The World Girds for Months of Trouble as the Coronavirus Pushes West that attempts to put a timeline on the  situation.