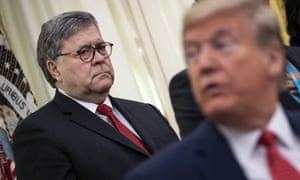 Attorney General William P. Barr delivered an extraordinary rebuke of President Trump yesterday, saying that his attacks on the Justice Department had made it “impossible for me to do my job” and that “I’m not going to be bullied or influenced by anybody.”

Mr. Barr has been among the president’s most loyal allies and denigrated by Democrats as nothing more than his personal lawyer, but he publicly challenged Mr. Trump in a way that no sitting cabinet member has.

“Whether it’s Congress, newspaper editorial boards or the president, I’m going to do what I think is right,” Mr. Barr said in an interview with ABC News, echoing comments he made a year ago at his confirmation hearing. “I cannot do my job here at the department with a constant background commentary that undercuts me.”   As reported by The New York Times.

“Mr. Barr’s remarks were aimed at containing the fallout from the department’s botched handling of its sentencing recommendation for Mr. Trump’s longtime friend Roger J. Stone Jr., who was convicted of seven felonies in a bid to obstruct a congressional investigation that threatened the president. After career prosecutors initially recommended a sentence of seven to nine years in prison, Mr. Trump spent days attacking them, the department and the judge presiding over Mr. Stone’s case.

Such tweets “make it impossible for me to do my job and to assure the courts and the prosecutors in the department that we’re doing our work with integrity,” Mr. Barr said.

He added, “It’s time to stop the tweeting about Department of Justice criminal cases.”

The fallout from the Stone episode threatened to spin out of control after the four prosecutors on the case withdrew from it and Mr. Trump widened his attacks on law enforcement, thrusting Mr. Barr into a full-blown crisis. Career prosecutors began to express worry that their work could be used to settle political scores and doubts that he could protect them from political interference.

The attorney general had been contemplating how to respond since he became aware of Mr. Trump’s attacks on the department, according to a person familiar with his thinking. Speaking up could have put Mr. Barr at risk of losing the backing of the president, but remaining silent would have permitted Mr. Trump to continue attacking law enforcement and all but invited open revolt among the some 115,000 employees of the Justice Department.

Ultimately, Mr. Barr concluded that he had to speak out to preserve his ability to do his job effectively, the person said.

Mr. Trump did not immediately respond on Twitter, but his press secretary, Stephanie Grisham, played down the attorney general’s remarks. “The president wasn’t bothered by the comments at all, and he has the right, just like every American citizen, to publicly offer his opinions,” she said, adding that Mr. Trump has confidence in his attorney general.

Mr. Barr was hardly the first top adviser to the president to wish he would stop tweeting, but he was the first to say it so publicly and forcefully while still in office. His action instantly set off speculation inside the administration about what it would mean for his future.”

I am sorry Mr. Barr but if you sell your soul to the devil, you are going to get burned.