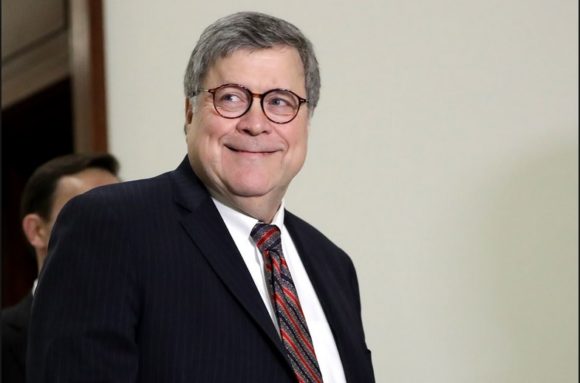 Senate Democrats have called on Attorney General William Barr to resign or face impeachment after President Donald Trump appeared to confirm that Barr had intervened in the case against the president’s longtime friend Roger Stone.

“Donald Trump is shredding the rule of law in this country,” Sen. Elizabeth Warren (D-Mass.) tweeted  yesterday. “Congress must act immediately to rein in our lawless Attorney General. Barr should resign or face impeachment.”

Sen. Richard Blumenthal of Connecticut, another Democrat, told NBC News earlier in the day that he believes Barr has “no choice” but to resign.

“He’s acting simply as a henchman of the president,” Blumenthal said.

“All four federal prosecutors who ran Stone’s trial abruptly withdrew from the case on Tuesday after Justice Department leadership intervened to reduce their sentencing recommendation.

The prosecutors told the court on Monday that Stone should face seven to nine years behind bars for witness tampering and lying to Congress. Trump, who has leaned on Stone as an adviser since the 1980s, tweeted that the sentencing recommendation was too long and called it a “miscarriage of justice.”

After Trump’s tweet, which was sent around 2 a.m. on Tuesday, the Justice Department signaled that it planned to revise the sentencing recommendation. The career prosecutors dropped out one by one soon after.

Trump appeared to confirm that Barr had intervened in the case in a series of tweets on Wednesday, praising the attorney general for “taking charge.” Trump had appointed Barr to head the Justice Department in 2018 after firing Jeff Sessions.

Meanwhile, White House Deputy Press Secretary Hogan Gidley denied that Trump had interfered in Stone’s sentencing during an appearance  yesterday on Fox News. “Look, [Trump] is the chief law enforcement officer,” Gidley said. “He has the right to do it. He just didn’t. He didn’t make any comment, didn’t have a conversation with the attorney general and that’s just ludicrous.”

Asked whether he would pardon Stone, Trump told reporters in the Oval Office on Wednesday that he doesn’t “want to say yet.”

“I want to thank the Justice Department,” he said. “They saw the horribleness of a nine-year sentence for doing nothing. You have murderers and drug addicts — they don’t get nine years.”

Senate Minority Leader Chuck Schumer (D-N.Y.) has called on the Justice Department’s inspector general to investigate the revised sentencing recommendation and urged the Senate Judiciary Committee to hold a hearing on the matter.

“The president is claiming that rigging the rules is perfectly legitimate,” Schumer said on the Senate floor Wednesday. “He claims an absolute right to order the Justice Department to do whatever he wants. And the president has as his attorney general an enabler.”

“That is third-world behavior ― not American behavior,” Schumer continued. “This is not ordinary stuff. Never seen it before with any president.”

Barr is a disgrace to the position of the attorney general and should go.