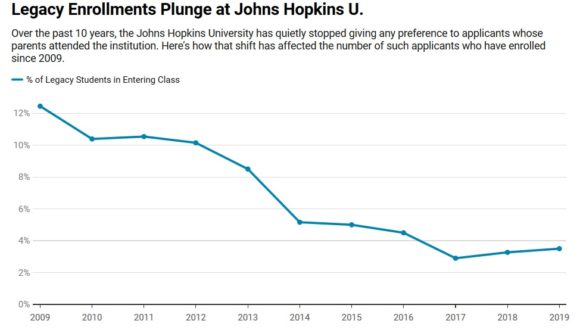 A number of selective colleges have begun to reconsider their legacy admissions policies in light of affirmative action challenges in court and more recently, the Varsity Blues scandals that exposed how admissions were being rigged for wealthier applicants.  Johns Hopkins University has been phasing out legacy admissions over the past ten years. The shift seems to have had an effect. In 2019 the incoming freshman class at Hopkins comprised only 3.5-percent legacies, down from 12.5 percent in 2009. In that same period, the proportion of students eligible for Pell Grants — an indication of financial need — went up from 9 percent to 19.1 percent.  The Chronicle of Higher Education interviewed Johns Hopkins President Ronald Daniels and Vice Provost for Admissions David Phillips for their perspectives on the policy change.  Here is an excerpt.

How did you pinpoint legacy admissions as a barrier to social mobility?

Daniels. I came to the United States about 15 years ago. I spent the bulk of my career at the University of Toronto, where I was a student, a faculty member, and then ultimately the dean of the law school for about a decade. What’s really a striking feature of Canadian universities, and indeed I think it’s true for many European universities as well, is that they do not have formal programs that provide systemic advantage to legacy applicants.

It was striking to see the extent to which this is a much more deeply ingrained feature of American higher education. The fact that other Ivy-plus peers, like MIT and Caltech, had long operated successfully without those programs gave me a sense that there was scope for choice here. And so that’s what led to the gradual shift in the character of our admissions program at Hopkins.

Did you talk about this with MIT and Caltech?

When did the shift happen?

Daniels. In 2009, when I started at Hopkins, legacies were about 12.5 percent of the undergraduate population. In 2014 — that was the first class Dave Phillips was responsible for admitting to Hopkins — legacies constituted about 5 percent of the entering class.

What was the process like for getting this approved? Did you have to go through any hoops to get your board and alumni behind the change?

Daniels. We kept the leadership of the Board of Trustees, and the full board, apprised of this change. And did it without much fanfare. But we did it very gradually and with some sense of caution because we weren’t clear as to what the impact would be on the admissions program and our alumni relations more generally. As we saw that we could make this change, we started to communicate it more broadly, and over time we changed the character of our communications on our website.

Phillips. When we initially changed the policy, we left some flexibility in place to consider legacy status in rare circumstances during early admission, and only in cases where an applicant met Johns Hopkins’s high academic standards. However, as time went on, we found we were not using that flexibility, and we updated the language of our policy to reflect our actual practices, which was no consideration of legacy at all.

So you would ask students if they were legacy students in that part of the process but just not consider it?

Daniels. Even today we are still asking the question of legacy status, but largely to gauge the impact of this shift in the program. Look, it’s desirable for us to have intergenerational ties to our alumni. We want to do that without having to put our thumb on the scales. So we continue to ask the question to see what kinds of trends we have in alumni applications.

So far, what are some of the effects of this change, good or bad?

Phillips. What that affords us to do is have the flexibility to greatly change the composition of our incoming class. It’s much more diverse, much more high achieving than it had been previously. We’ve had significant increases in the proportion of first-generation students in our class, female engineers; the racial composition has changed.

Daniels. Here it’s important to say that the curtailment and ultimately the elimination of legacy preferences was not solely responsible for all the changes that have been happening over the last decade at Hopkins in respect to the character of the first-year class. But the termination of the program gives more space for the achievement of those other goals. So there’s the use of financial aid, the augmentation of financial-aid funds, how you are marketing to students — all these other things are happening simultaneously with the change in this program.

Have you gotten any pushback from alumni or members of the board?

Phillips. There’s been some, of course, but there’s been just as many alums who have been very supportive of the move and feel prouder to be part of a university moving in this direction.

Was there a decline in alumni donations?

Daniels. No. Even if one accounts for the very significant largess of Michael Bloomberg, we’ve seen a steadily increasing level of participation and quantum of donation by our alumni.

“We anticipated that some of our alums would be disappointed. But we were quite frankly surprised and elated by the number who said we get it.”

Why keep it quiet for years rather than announce it in a press release?

Daniels. Because this hadn’t been done in the last couple of decades by a private institution that we were aware of, at least within our peer group.

It’s not unlike what we did with the shift we made with our need-blind admissions process. We spent a number of years admitting our class on a need-blind basis but did not broadcast it.

But beginning about a year or two ago, we started to talk, at least within the Hopkins community, about the change. Our sense was that this had enriched the university and it was a change that we were proud of.

Were there things logistically that had to happen in order for Johns Hopkins to make this change?

Phillips. Mostly just around framing for the staff and office about what to be focused on in the evaluation process. What matters and what doesn’t and what we value.

Were there unforeseen consequences?

Daniels. We anticipated that some of our alums would be disappointed. But we were quite frankly surprised and elated by the number who said we get it, we understand the hard-wiring of advantage in so many other aspects of American life to students applying from homes of privilege. And that we were putting our thumbs on the scales as a university to reinforce that sense of advantage was something that moved people.

Those voices of support have been very powerful and encouraging.

Congratulations to Johns Hopkins for recognizing its responsibility for social mobility.