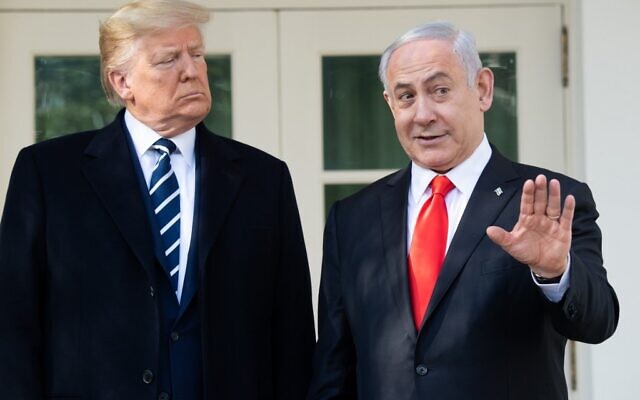 Tom Friedman in his New York Times column this morning analyzes the substance and timing of President Trump’s and Benjamin Netanyahu’s new plan for “peace” in Israel.  Entitled, “Is Trump Bibi’s Chump?”, Friedman” goes on to consider whether this plan is “two states for two peoples or is it about one diversion for two dirty leaders?”  He exhorts the president to demand a commitment so he doesn’t get played.  Here is an excerpt:

“Given the timing of the release on Tuesday of President Trump’s Middle East peace plan, I have to begin by asking: Is this plan about two states for two peoples or is it about one diversion for two dirty leaders?

It sure feels like the latter. After all, both President Trump and Prime Minister Benjamin Netanyahu are, in effect, facing job-threatening charges — Trump for obstruction of justice and abuse of power and Bibi, who was literally indicted on Tuesday, for fraud, bribery and breach of trust. They both had a huge need to change the subject and shore up their common base of right-wing Jews and evangelicals.

If I were Jared Kushner and had worked for three years on a peace plan — and was serious about it getting a fair and full hearing from all sides — there is no way I would have released it right now. This smells.

But then my long-held view has always been that the Middle East puts a smile on your face only if a change for the better starts with them. Camp David started with Israelis and Egyptians, and America was brought in only later. Oslo was started by Israelis and Palestinians, and America joined only later. Tunisia, the only Arab Spring country to make its way to democracy, is the one Arab country that America had virtually nothing to do with. For a peace initiative to be serious and sustainable, it should always start with them.

And yet, I also know that when America puts something this detailed on the table, it cannot be ignored, at least in the near term. Netanyahu already announced that with Trump’s blessings Israel will quickly move to apply its law (tantamount to annexation) to the West Bank’s Jordan Valley and all Jewish settlements in the occupied territory. It will be interesting to see how the European Union, which funds much of the Palestinian governing infrastructure in the West Bank, responds once it’s studied the plan, not to mention the reaction of everyday Palestinians and Arabs. (I don’t expect much. This conflict seems to have passed its fix-by date.)

“Without Trump getting Netanyahu to definitively end his claims to all of the West Bank, and without Palestinian leaders able to reunite their disparate political factions in Gaza and the West Bank into a single body that can theoretically say “yes” to a fair outcome for their people, while also recognizing Israel as a Jewish state, Trump’s Deal of the Century will join a century-old library of failed Middle East peace plans.”

Friedman has this right.  The announcement of this plan is all about deflecting Trump’s and Netanyahu’s precarious political positions.