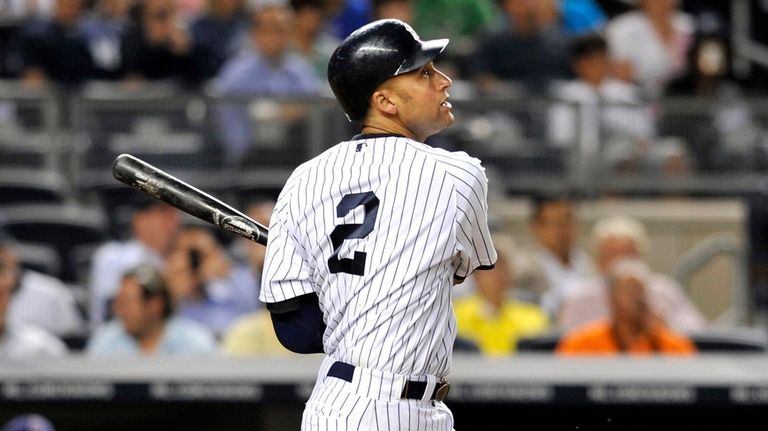 I have been a New York Yankee fan for as long as I can remember.  I grew up about six blocks from Yankee Stadium and watched all the great ball players from 1950 to the present.  I take my son and grandson to Yankee games now and watch the team on television on a regular basis.  My opinion is that Derek Jeter is the best baseball player I have ever seen.  Beside his impressive stats, he as Mr. Clutch and led the Yankees to five World Series championships and seven American League pennants. Yesterday he was elected to the Baseball Hall of Fame on the first ballot.  Here is an excerpt from a write-up in the New York Times.

“It was never a question that Derek Jeter, the longtime captain of the Yankees and one of the most celebrated players in baseball history, was going to be enshrined in the Baseball Hall of Fame. The intrigue instead centered on whether he would become the second unanimously elected player, following his former teammate and fellow five-time World Series champion Mariano Rivera.

Jeter was named on all but one of the 397 ballots cast by members of the Baseball Writers’ Association of America — more than enough to clear the 75 percent hurdle for election. His 99.7 percent share of the vote eclipsed the previous second-highest voting mark, 99.3 percent, for outfielder Ken Griffey Jr. in 2016.

Jeter was joined in the Hall’s 2020 class by Larry Walker, the standout slugger who played the majority of his career in Colorado with the Rockies. Walker was in his 10th and final year of eligibility on the ballot and will now be the first Canadian-born position player in the Hall of Fame.

Walker and Jeter, who is now leading a rebuilding effort in Miami as the chief executive officer and part owner of the Marlins, will be inducted into the Hall of Fame on July 26 in Cooperstown, N.Y., along with Marvin Miller, the union leader who revolutionized the sport by helping players gain the right to free agency, and catcher Ted Simmons. The latter was passed over by the writers, but both were elected by a smaller committee last month.

“Everyone told me it was a foregone conclusion,” Jeter said, perhaps too modestly, on a conference call Tuesday night with reporters. “I didn’t buy it. So it was not a relaxing day.”

Jeter said he was nervous waiting for the phone call with the news of his election. He brushed off the fact that he fell one vote short of unanimity.

“I look at all the votes that I got, and it takes a lot of votes to get elected in the Hall of Fame,” he said. “Trying to get that many people to agree on something, that’s pretty difficult to do. I’m just extremely excited and honored to be elected.”

Jeter enters the Hall of Fame with an impressive résumé. Born in New Jersey but raised in Michigan with a dream of playing shortstop in pinstripes, Jeter was picked sixth over all in the 1992 draft by the Yankees and was persuaded to sign with them instead of playing baseball at the University of Michigan.

“The only place Derek Jeter’s going is to Cooperstown,” Dick Groch, a former Yankees scout who signed Jeter, told team officials at the time. Jeter was in the major leagues by 1995 and won the American League Rookie of the Year Award the following season.”