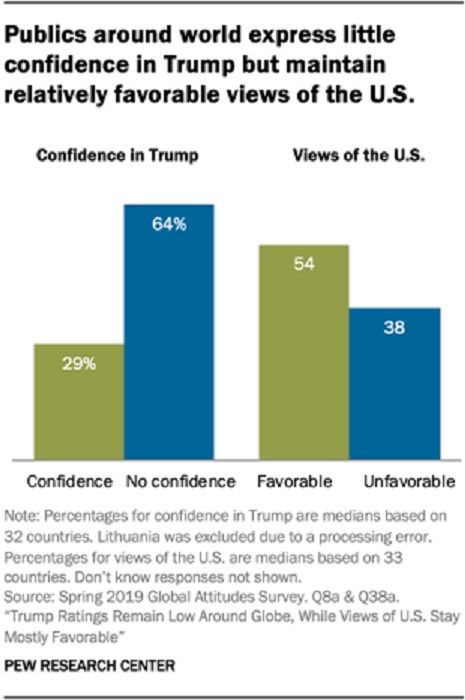 A new study by the Pew Research Center finds Trump’s favorability tanking to below 30% around the world. Across 32 countries surveyed by the Pew Research Center, a median of 64% say they do not have confidence in Trump to do the right thing in world affairs, while just 29% express confidence in the American leader. The data also suggest that any lack of trust is less about the United States than it is about Trump specifically.

Anti-Trump sentiments are especially common in Western Europe: Roughly three-in-four or more lack confidence in Trump in Germany, Sweden, France, Spain and the Netherlands. He also gets especially poor reviews in Mexico, where 89% do not have confidence in him.

In nearly all nations where trends are available, Trump receives lower ratings than his predecessor, Barack Obama. As reported by the Center in 2017, international confidence in the U.S. president plummeted after Trump’s inauguration, while favorable ratings for the United States also declined. Trump also trails other world leaders such Angela Merkel, Emmanuel Macron, and even Vladimir Putin.

The Pew Report provides a lot of interesting data on how different countries perceive the United States, Trump, and other world leaders.  Also the survey was conducted prior to the Jan. 3, 2020, U.S. drone strike that killed Iranian Gen. Qassem Soleimani.