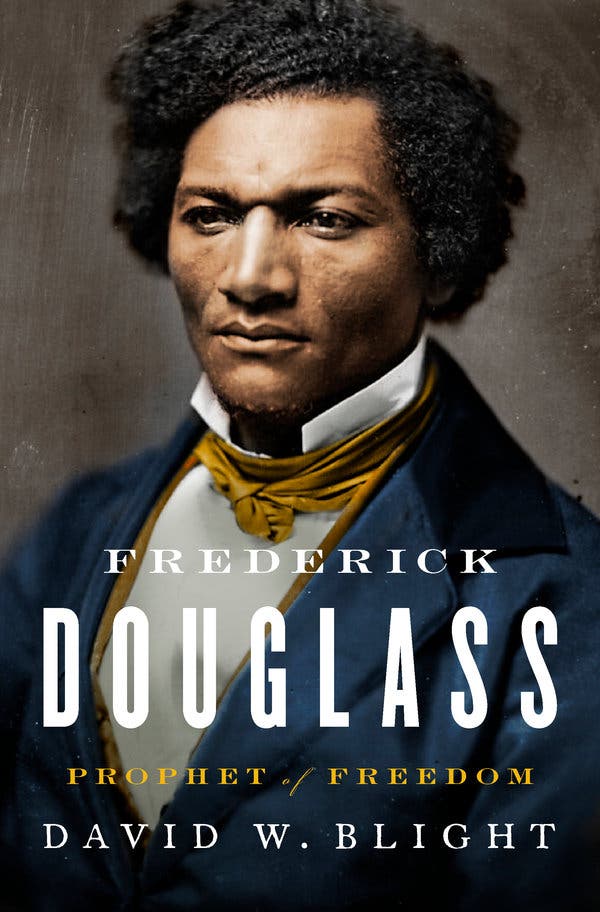 I have just finished reading David Blight’s biography, Frederick Douglass:  Prophet of Freedom.  It is a deep dive (800 pages plus eighty pages of notes) into the life of probably the most famous abolitionist of the 19th century.  The beginning and end move along briskly but you will have to slog through the middle where it gets into the interactions of Douglass with other prominent abolitionists of the period.  The description Douglass’s time as a slave and his escape are very well-done.

In addition to the many details about his private life especially his wife and children, possible lovers (handled respectfully), and conflicts with contemporaries, Blight also reviews much of the background of the abolitionist movement in this country and in Europe, the Civil War, Reconstruction, and Jim Crowe.  There are interesting details of the Douglass’s interactions with American presidents including Lincoln, Johnson, Grant and Harrison.  It also contains insights into the evolution of the post Civil War Republican and Democratic parties.

Below is the New York Times review which highly praises Blight’s work.  I recommend this book if you want to learn more about Douglass and the middle/latter parts of 19th century America.

The alchemy that transformed an unknown fugitive slave named Frederick Douglass into one of the most celebrated orators and political theorists in the world finished its work with astonishing speed. Douglass was just 20 years old when, on Sept. 3, 1838, he dressed up as a sailor and stole out of Baltimore carrying borrowed freedom documents. He and his wife — a free black Marylander who had aided the escape — fled to New Bedford, Mass., where Douglass was recruited to the abolitionist movement while honing his oratory at a local church.

As the historian David W. Blight shows in his cinematic and deeply engaging “Frederick Douglass: Prophet of Freedom,” white abolitionists like William Lloyd Garrison were smitten with Douglass, instantly recognizing the value of a recruit just out of chains whose eloquence refuted the claim that Negroes were inferior and who could condemn slavery as immoral by drawing on America’s founding documents as well as his own bitter experience under the lash. It could not have been lost on the dapper, self-regarding Douglass that men and women swooned over him, describing him in terms that bordered on erotic. Garrison himself went starry-eyed, declaring that God had authored the young man’s soul “but a little lower than the angels.” Enraptured by the young orator in 1841, a white New England newspaper editor wrote: “As this Douglass stood there in manly attitude, with erect form, and glistening eye and deep-toned voice, telling us that he had been secretly devising means to effect his release, we could not help thinking of Spartacus, the Gladiator.” The activist Elizabeth Cady Stanton saw him a year later at Boston’s Faneuil Hall and spoke for many white women when she wrote: “He stood there like an African prince, conscious of his dignity and power, grand in his physical proportions, majestic in his wrath, as with keen wit, satire and indignation he portrayed the bitterness of slavery.”

Douglass became a marathon traveler for the abolitionist cause at a time when moving about the country by train was punishing in itself. Racist conductors worsened the ordeal by exiling him to “mean, dirty and uncomfortable” Negro cars or ejected him from the train altogether. Adoring crowds at some stops alternated with mobs like the one in Indiana that cried “kill the nigger” while beating Douglass unconscious and breaking his right hand. The itinerant orator was just seven years out of chains — and already the equivalent of a modern-day rock star — when the first of his three memoirs, “Narrative of the Life of Frederick Douglass, an American Slave,” made him the most well-known Negro on the globe.

Dependent upon abolitionist charity for his family’s daily bread, Douglass nonetheless chafed under a stifling Garrisonian orthodoxy that required adherents to embrace pacifism and abstain from politics. He charted a course away from all that by starting his own newspaper and openly embracing as household saints blood-drenched figures like the slave-rebellion leader Nat Turner and the white revolutionary John Brown, both of whom he classed with the founders. His fledgling newspaper, The North Star, served as the school where he sharpened his grasp of politics and developed a penetrating style as an editorialist. By the time Abraham Lincoln was elected in 1860, Douglass understood full well that slavery could be purged from the United States only with blood — as his friend John Brown had put it on the way to the gallows — and launched blistering attacks on those who sought to compromise with the institution rather than obliterate it.

Douglass thought comparatively little of Lincoln at first — describing him as “honest” but without claim to “any literary culture beyond the circle of his practical duties” — and breathed fire when Lincoln used the first-ever presidential meeting with African-Americans to promote a racist plan for colonizing Negroes outside of the country. As the Civil War raged toward conclusion, Douglass attacked Lincoln for vacillating on black rights in the South. Wounded, the president summoned him to the White House and sought his help with the war effort. By this point, the man who had slipped out of Baltimore with borrowed freedom papers was poised to play a central role in America’s postwar transformation.

The novelist William Burroughs once complained about autobiographers who conceal their lives in print, quipping that the Paul Bowles memoir “Without Stopping” would have been better titled “Without Telling.” Blight makes a similar case against Douglass, who shrouded his domestic life in secrecy even as he wrote and rewrote his personal story in three widely read autobiographies that totaled more than 1,200 pages. “Douglass invited us into his life over and over,” Blight writes, “and it is a rich literary and historical feast to read the music of Douglass’s words. But as he sits majestically at the head of the table, it is as if he slips out of the room right when we so wish to know more — anything — about his more private thoughts, motivations and memories of the many conflicts in his personal life.”

Douglass cultivated the fiction that he was “self-made” and had sprung fully formed from his own forehead. Blight dismantles this pretense in a tour de force of storytelling and analysis, showing that the young orator-to-be had benefited from a great deal of mentorship and good fortune. Viewed through this lens, the fabled escape from slavery takes on different contours. The slave master’s decision not to sell the rebellious young Fred into a living death in the Deep South — and instead to consign him to the custody of a brother in Baltimore — can be credibly seen as an act of familial grace by a slave owner toward a half-white member of his extended family. Among those in the free black community of Baltimore who embraced Fred and propelled him toward freedom was his wife-to-be, the housekeeper Anna Murray.

Blight draws on new archival material and insights gleaned from a lifetime in the company of his subject to shed light on the orator’s complex relationship with his wife, Anna, and the two white women who came between the couple within the walls of the Douglass family home in Rochester.

The great man’s vocation as a wandering oracle was possible because Anna, who bore five children (only four lived to adulthood), ran the household with a sure hand, hosting fugitive slaves, far-flung relatives and others who turned up at the front door in need. Anna, whom Blight describes as “largely illiterate,” could be of little help with her husband’s journalism. For that, the charismatic orator called up the British abolitionist Julia Griffiths, who put aside her life and moved in 1849 to be with him in Rochester and to get The North Star off the ground. She enabled Douglass to survive personally and professionally, managing and raising money for the newspaper and for the food that came across the Douglass family table. She helped “to polish a raw genius into a gem and, for a time, managed his emotional health as well as his bank accounts.” Together with her sister, Eliza, Griffiths relieved the Douglasses of an enormous financial burden by purchasing the mortgage of the family home. White Rochester was scandalized when Griffiths moved into the Douglass home, an arrangement that spawned rumors of a romantic link between patron and orator. It is alleged that she moved out when Anna “ordered it.”

That Griffiths loved Douglass is clear on the face of things, but any claim that the two carried on a sexual relationship right under Anna’s nose seems far-fetched. The eccentric German intellectual Ottilie Assing was another matter. She wandered into the Douglasses’ lives in 1856, seeking permission to translate his second autobiography, “My Bondage and My Freedom,” into German. She remained in the family orbit for nearly three decades, serving as confidante and interlocutor — and lover. Douglass frequented her rooms in Hoboken, N.J., where the participants of her salon lionized him, validating his rise from slavery into the thinking classes. Assing shielded him when he was on the run from conspiracy charges in connection with John Brown’s raid on Harpers Ferry, when he came within a hairbreadth of being captured and marched to the gallows with his revolutionary friend.

That Assing was obsessed with the famous orator would have been readily apparent to Anna during the interloper’s frequent intrusion on the family home, where she lived for months at a time. We know nothing of Anna’s feelings on the matter — but the triangle of Frederick, Anna and the love-struck Ottilie comes through like the plot of an Edith Wharton novel. At different points, Assing referred to Anna as a “veritable beast” who kept her from her beloved Frederick, and as the “border state” that prevented her from advancing toward her heart’s true goal. As Blight writes, “Although Assing sipped tea occasionally with Mrs. Douglass, she held Anna in utter contempt, disrespecting her lack of education and even at times privately denigrating her role as homemaker.” The amorous German lingered in Douglass’s circle year after year, waiting in vain for the divorce that would allow her to “walk tall as the rightful ‘Mrs. Douglass.’”

By the time Anna died in 1882, Assing was bitterly aware that the aging orator intended to marry Helen Pitts, a well-educated white woman in her 40s, who worked for Douglass in the recorder of deeds office in Washington. The nearly 66-year-old Douglass held the plan secret even from his children, with whom he also worked daily, and who seem to have learned of the marriage from press inquiries. He failed to notify his faithful British friend Julia, who received the news secondhand from friends in Rochester. Gracious as usual, she wished the newlyweds well and hoped that the union would give him “true happiness” in the evening of his days. Later that year, Assing killed herself in a Paris park — drinking potassium cyanide — leaving her beloved a tidy sum in her will.