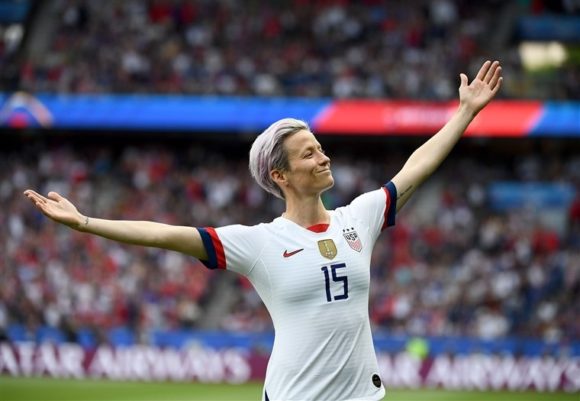 U.S. women’s national soccer team captain Megan Rapinoe yesterday was named as Sports Illustrated’s 2019 sportsperson of the year. In the press release, Rapinoe was described “as a force of nature on and off the field” by the magazine.

“The outspoken squad leader galvanized the team amid a victorious World Cup push and a high-profile lawsuit for equal pay, all under the cloud of personal attacks by President Donald Trump.

“Choosing Megan as the Sportsperson of the Year was an easy decision,” Sports Illustrated’s co-editor in chief Steve Cannella said in a statement.

“She is a force of nature on and off the field, a trailblazing soccer player who also proves every day how large and loud a voice a socially conscious athlete can have in 2019.”

The award caps a highly decorated year for the 34-year-old midfielder, who also won the Golden Boot and Golden Ball as the top scorer and best player at the World Cup, and the Ballon d’Or award, given to the world’s best female player.

Off the field, the openly gay Rapinoe has repeatedly accused the Trump administration of pursuing policies that further threaten the rights of marginalized communities, including LGBTQ people and immigrants.

She made headlines in June when, while speculating about a potential World Cup victory and the traditional White House invitation that might follow, she told a reporter, “I’m not going to the fucking White House.”

″[Trump] tries to avoid inviting a team that might decline,” she said later. “Or, like he did when the [NBA’s Golden State] Warriors turned him down (in 2017), he’ll claim they hadn’t been invited in the first place.”

Trump reacted in a series of tweets attacking Rapinoe and accusing her of disrespecting “our Country, the White House, [and] our Flag.” Though he pledged a team invite regardless of the World Cup’s outcome, he later backtracked on the promise.

While no White House visit was in the cards, some of the players did meet with members of Congress to discuss issues like the pay disparity between the women’s and men’s national soccer teams.

While no White House visit was in the cards, some of the players did meet with members of Congress to discuss issues like the pay disparity between the women’s and men’s national soccer teams. Earlier this year, 28 members of the team sued the U.S. Soccer Federation claiming “institutionalized gender discrimination,” a violation of the Equal Pay Act and the Civil Rights Act.

The suit is scheduled for trial in May.