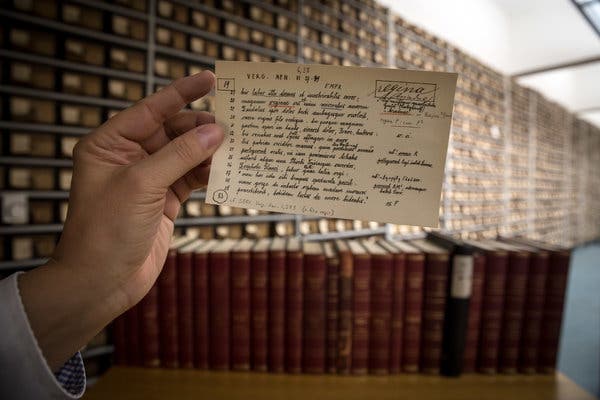 A slip of paper from the Thesaurus Linguae Latinae Archive for the word “regina,” which means “queen.”

Annalisa Quinn has a featured article in today’s New York Times entitled, Latin Dictionary’s Journey: A to Zythum in 125 Years (and Counting).  It describes how researchers in Germany have been working on the Thesaurus Linguae Latinae since the 1890s. They hope to finish in 2050, but that might be optimistic.  Here is an excerpt:

“When German researchers began working on a new Latin dictionary in the 1890s, they thought they might finish in 15 or 20 years.

In the 125 years since, the Thesaurus Linguae Latinae (T.L.L.) has seen the fall of an empire, two world wars and the division and reunification of Germany. In the meantime, they are up to the letter R.

This is not for lack of effort. Most dictionaries focus on the most prominent or recent meaning of a word; this one aims to show every single way anyone ever used it, from the earliest Latin inscriptions in the sixth century B.C. to around A.D. 600. The dictionary’s founder, Eduard Wölfflin, who died in 1908, described entries in the T.L.L. not as definitions, but “biographies” of words.

The first entry, for the letter A, was published in 1900. The T.L.L. is expected to reach its final word — “zythum,” an Egyptian beer — by 2050. A scholarly project of painstaking exactness and glacial speed, it has so far produced 18 volumes of huge pages with tiny text, the collective work of nearly 400 scholars, many of them long since dead. The letters Q and N were set aside, because they begin too many difficult words, so researchers will have to go back and work on those, too.

“Its scale is prodigious,” David Butterfield, a senior lecturer in Classics at Cambridge, said in an email, adding that when the first publication appeared in 1900, “it did not go unnoticed that the word closing that installment was ‘absurdus.’”

It’s a monumental effort aimed at a small group of classicists, for whom the ability to understand every way a word was used is important not only for reading literature, but also understanding language and history.”

This project is incredible and I can see my Latin teachers in high school cheering these scholars on.

The entire article is worth a read or should I say legere.