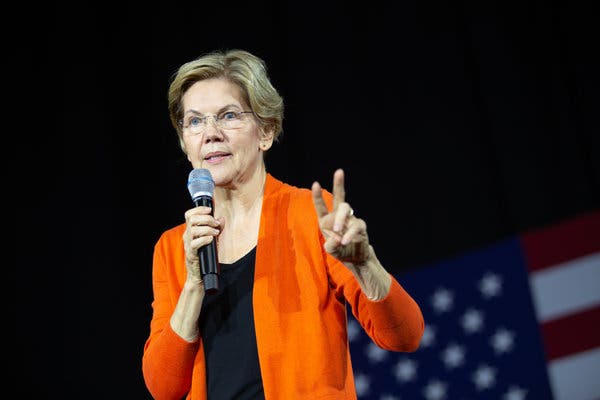 The detailed plan seeks to equalize school funding between low and high-income areas. It proposes a new education grant program funded at a whopping $100 billion over 10 years — the equivalent of $1 million for every school in the country — for schools to use on programs or resources of their choice. Her plan would be paid for by a wealth tax on fortunes above $50 million.

In recent months, Warren’s views of K-12 education have been a source of speculation and scrutiny. Soon after announcing a run for the presidency, she unveiled an expansive college and child care plan. But she disclosed fewer details on her plans for K-12, touching on an opposition to charter schools and pledging to appoint a public school teacher as the U.S. secretary of education.

However, her newly released plan is extensive, taking direct aim at some of the most entrenched sources of inequality in K-12 education.

On the issue of school segregation ― a polarizing issue that even liberal politicians often shy away from ― Warren pledges to encourage states to use a portion of their federal funds on school integration projects. Under a Warren administration, the departments of Education and Justice will crack down on wealthier, whiter communities that try to break away from their more diverse school districts and hoard resources ― a phenomenon called school district secession.

“Broad public affirmation of the Brown v. Board of Education decisions in the 1950s and recent debates about historical desegregation policies have obscured an uncomfortable truth ― our public schools are more segregated today than they were about thirty years ago,” states the plan, titled, “A Great Public School Education for Every Student.”

Warren’s plan represents a stark departure from this line of thinking. She pledges to ban test scores as a significant determinant in personnel terminations, school closures and other “high-stakes decisions,” noting that “the push toward high-stakes standardized testing has hurt both students and teachers.”

The plan also sounds off on charter schools, one of the most controversial issues in education, by taking a hard line against them. Charter schools — public schools that are funded with taxpayer dollars but privately operated ―  were once a darling of both mainstream Democratic and Republican circles, but have faced increasing scrutiny from liberals in recent years.

Warren pledges to fight to ban for-profit charter schools, which represent around 15% of the sector. But she also goes after nonprofit ones, promising to end a federal program that provides funding for new schools and opposing provisions that allow them to sometimes evade the same level of transparency and accountability as traditional public schools. The plan seeks to ban nonprofit charters that employ or outsource operations to for-profit service providers and calls for the IRS to investigate these schools’ nonprofit tax status.

“Efforts to expand the footprint of charter schools, often without even ensuring that charters are subject to the same transparency requirements and safeguards as traditional public schools, strain the resources of school districts and leave students behind,” the plan says.

Presidential candidate Sen. Bernie Sanders (I-Vt.), who released his education plan in May, similarly took aim at charters in his plan, framing them as an issue of racial justice. His plan drew ire from some education reform groups that argued he was actually doing children of color a disservice.

“Senator Sanders is literally saying I’m going to stand in the schoolhouse door and prevent kids from going [to charter schools], like a segregationist,” Amy Wilkins, senior vice president of advocacy at the National Alliance for Public Charter Schools, told HuffPost at the time. He is trying to “prevent kids, many of whom are low-income, or of color, from having a choice.”

Warren has framed public education as a deeply personal issue. She spent a short amount of time as a special education teacher when she was in her 20s, but said she left the classroom after being discriminated against as a pregnant woman.

Other aspects of Warren’s plan include quadrupling funding for Title I ― the federal program that provides money to schools with high proportions of low-income children ― as well as raising pay for educators, fully funding the Individuals with Disabilities Education Act and helping to expand school employees’ collective bargaining power. She frames the recent wave of teacher protests around the country as a feminist issue, and she has pledged to enact a law that would make sure public employees can collectively bargain in each state.

So far, “A Great Public School Education for Every Student” has garnered praise from the leaders of both of the nation’s teachers unions, the American Federation of Teachers and the National Education Association.

“Sen. Elizabeth Warren’s plan for our nation’s public schools would be a game changer for our public schools and the 90 percent of America’s students who attend them,” Randi Weingarten, the president of AFT, said in a statement. “Like so many of the other candidates’ education plans we have praised, this one is bold and thorough and lays out tangible steps and resources that are critical for all students to thrive.”

“What distinguishes this plan is that it is obvious it’s drawn through the lens of someone who has spent time as a teacher in a classroom,” Weingarten added.

Glad to see a presidential candidate talk about education.  Imagine Warren, Biden  or Sanders in a debate with Trump about improving American public education.