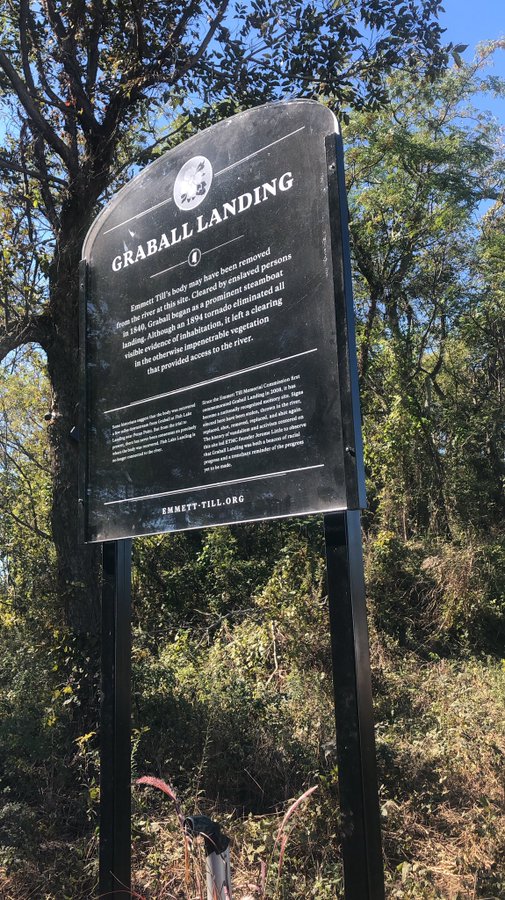 A new memorial has been erected in honor of the civil rights martyr, Emmett Till.  And this time, it’s bulletproof.  Below is a photograph of the previous, bullet-ridden memorial that was replaced.  As reported by The Chicago Tribune:

“Members of Till’s family gathered yesterday at Graball Landing, the spot where the 14-year-old’s brutalized body was pulled from the Tallahatchie River after his murder in 1955. Encircled by a vast cotton field and quintessential Mississippi flora, they watched as a new Till memorial was unveiled, this one 10 times heavier than the last, and made of bulletproof steel.

Till’s lynching, which occurred after a white woman accused him of harassing her outside of a Mississippi grocery store, is largely seen as the catalyst for the Civil Rights Movement.

“This marker answers the question as to what we do with our history,” said Reverend Willie Williams, co-director of the Emmett Till Memorial Commission, which advocated for the new marker. “Do we learn from it? Do we use it to help our society have greater respect for humanity? This answers that.”

Members of Till’s family, including his cousins Rev. Wheeler Parker — the last living witness of Till’s kidnapping ― and Ollie Gordon and her daughter Airickca Gordon-Taylor, were in attendance to christen the new marker. Unlike previous markers placed near the location, the new metallic, commemorative sign will be behind a gate and placed under the watch of surveillance cameras, according to the memorial commission.

In July, a photo circulated online showed three Ole Miss students cheerfully posing with rifles beside a bullet-riddled Emmett Till memorial. That sign and others drawing attention to Till’s killing have been frequent, literal targets for vandals wanting to obscure and destroy his legacy.

Jessie Jaynes-Diming, a civil rights tour guide and board member on the Emmett Till Memorial Commission, said the vandalism is an attempt by Mississippians to distance themselves from the state’s wretched, racist history and alleviate themselves of guilt.

“To desecrate the commemoration ― not only of a Black person, but of a 14-year-old boy ― is heartless,” she said. “And it’s their way of saying, ‘So what? I didn’t have anything to do with it. Why are y’all dredging this up?’”

In 1955, a white shopkeeper, Carolyn Bryant, accused Till of catcalling her and grabbing her outside of Bryant’s Grocery and Meat Market in Money, Mississippi. Days later, witnesses say Bryant’s husband, Roy, and his half-brother J.W. Milam kidnapped Till from his uncle’s home, then beat him, shot him in the head and threw his weighted body into the Tallahatchie River. A jury acquitted the two men that year after minutes of deliberation. Carolyn Bryant admitted decades later that her initial claims that Till harassed her were lies.

After Till’s swollen body was recovered from the river, his mother, Mamie, famously demanded an open-coffin wake at her son’s funeral to publicly show the brutality of racism in the United States.”