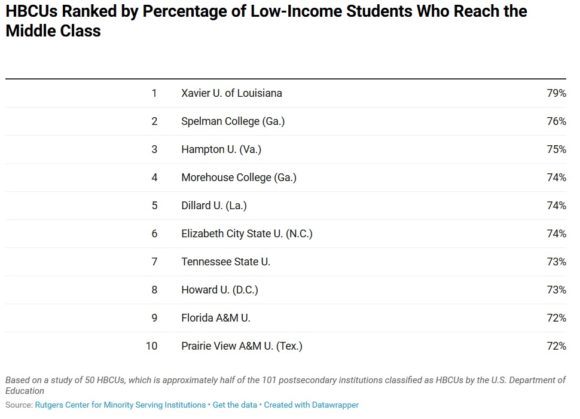 The Chronicle of Higher Education has a featured article this morning highlighting the success of black colleges (HCBUs) in moving poorer black students into the middle class.  The graphic above comes from a study that identifies the success of HCBUs in this regard.

Here is an excerpt from the article.

“Historically black colleges and universities have far smaller endowments and a far larger share of low-income students than predominantly white institutions do. Yet black colleges raise students up the ladder of economic success at rates comparable to white colleges, according to a study to be released today by the Rutgers Center for Minority Serving Institutions.

A report on the study, drawing on data from the Opportunity Insights project at Harvard University, compared the trajectories of students who attended 50 HBCUs against those who went to mostly white institutions in the same regions. Two-thirds of HBCU students from low-income families, meaning those with household incomes of roughly $25,000 or less, ended up earning at least middle-class incomes by their early to mid-30s. Seventy percent of low-income students at mostly white colleges reached the middle class or higher by that age, according to the report, “Moving Upward and Onward: Income Mobility at Historically Black Colleges and Universities.”

Over all, almost 70 percent of HBCU students achieved what the researchers describe as incomes that are middle class or higher.

The notion that black colleges are pipelines to the middle class will not surprise people who work at the institutions, which have been serving that role for generations. Still, the research team — a multi-institution collaboration led by Robert A. Nathenson of the University of Pennsylvania — presented its findings as an empirical validation for a segment of higher education that has long been forced to defend itself against outside critics. HBCUs, the report notes, face funding cuts, doubts about their value, and questions about the constitutionality of their federal funding. Critics portray HBCUs as “anachronistic appendages of a racist past,” as one of the report’s authors, Marybeth Gasman of Rutgers, has written.

But the report, while validating HBCUs, also identifies a troubling counter-trend facing their graduates. For students who come from higher-income families, a “stark difference” exists between blacks’ and whites’ ability to maintain privilege across generations, said Nathenson, a sociologist employed as a research specialist with the Consortium for Policy Research in Education at Penn’s Graduate School of Education. Better-off HBCU students have a 50-percent chance of replicating their parents’ affluence, the study found. Students from white colleges have a 60-percent chance.

That difference probably results from the structural racism of American life, Nathenson argued, rather than factors tied to the colleges. Earlier studies have also identified the “difficulty African American families face maintaining socioeconomic gains across generations,” Nathenson noted. For example, 60 percent of white people who have a parent with a four-year college degree also go on to earn such a degree, according to an analysis published this year by the Federal Reserve Bank of St. Louis; the figure for African Americans is 34 percent.”

In sum, the HCBUs are among the jewels of American higher education.