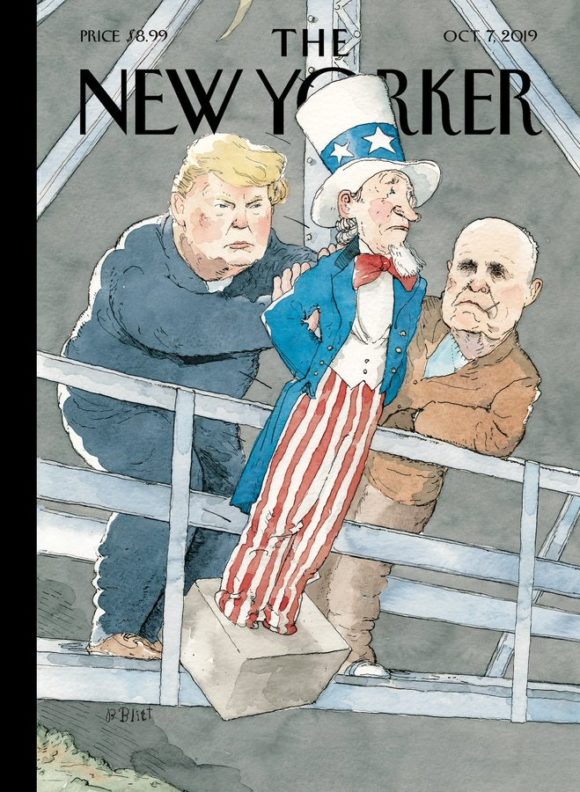 The cover for the upcoming edition of the New Yorker depicts President Trump and his personal lawyer Rudy Giuliani as mobsters who are murdering Uncle Sam.

Trump and Giuliani have been embroiled in a scandal surrounding a July 25 phone call the president had with Ukrainian President Volodymyr Zelensky during which he asked the foreign leader to investigate his potential 2020 opponent Joe Biden and his son, Hunter Biden.

The president also suggested that Zelensky work with Giuliani, who has been operating his own investigation into the matter, and Attorney General William Barr.

The imagery for the cover, which was done by Barry Blitt, specifically shows the president and former New York City mayor holding Uncle Sam over the railing of a bridge with Uncle Sam’s feet stuck in a block of cement so he’d drown.

“On Tuesday, Nancy Pelosi announced that the House of Representatives would be pursuing a formal impeachment inquiry against President Trump,” the New Yorker said of the image.

The outlet continued, “The news came after a whistle-blower’s complaint, which was released to the public on Thursday and alleges that Trump — with the help of Rudy Giuliani — has been using ‘the power of his office to solicit interference from a foreign country in the 2020 election.’ Barry Blitt, ever the first responder, takes on the drama in the cover for next week’s magazine.”

The image is funny but incredibly sad!