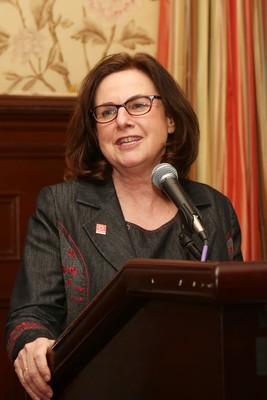 Goldie Blumenstyk (The Chronicle of Higher Education) passed along this interview with Gail Mellow, who recently retired as president of LaGuardia Community College.

With over thirty years of experience in the field, Mellow lists her top 3 wishes for higher education.

“Gail Mellow is retiring as president at LaGuardia Community College, but I hope that doesn’t mean she’s leaving the higher education scene altogether.  Anyone who cares a whit about good teaching—or needy students getting their shot—should hope the same.

The institution she led serves some 50,000 students, many of them low-income, immigrants, or first-generation college students—or, in some cases, all three. So it’s not surprising that Mellow has emerged as a national advocate for increasing access to higher education. But what I’ve always admired is the way she fights to make sure her students are put in close contact with tech companies and other desirable employers that might otherwise overlook a community college.1 That, and her frequent public reminders that even students in the most practical of two-year programs benefit from ideas drawn from liberal-arts curricula. . . .

I’ve never been bored when talking to Mellow. But usually she’s answering my questions. So when I caught up with her, I gave her the platform, by asking her to list her three wishes for higher education. In order, they are:

Mellow says that narrative “has been perniciously advocated to the particular disadvantage of low-income students.” She’s not arguing that college works out for every single student. But she distrusts the anti-college tropes increasingly sounded by “too many voices in the media and other places,” particularly in the past eight years. When you look at the data on how higher education produces wage changes and life changes for college graduates, she notes, “it’s very hard to say it’s not worth it.”

This is one of her passions. She’s co-written a book on the subject2 and speaks often about the need to adapt teaching techniques in light of changes in technology and the American college population. (At a conference I attended not long ago, Mellow was making that case: Higher education could no longer assume, she said, that “even if you were a godawful professor, it didn’t matter.”) Taking teaching more seriously, she tells me, would require different incentives. It’s easier to reward professors for their research than for their teaching, she says, because good research is easier to measure.

Honestly, this one threw me for a minute. I know that American higher education isn’t a system. But most students don’t. That was her point.

Sure, there are still plenty of students who enroll in college at 18 and graduate from the same institution four years later. But that hasn’t been the experience for many students for many years. They start at a community college, stop out for a while, and then maybe try another college a few years later. Or they cobble together credits from a bunch of online classes or maybe even through prior-learning credits; they try to enroll in a two-year or four-year institution to complete their degree, but are required to repeat courses or take extra credits in the process. There’s a name for this phenomenon, and it isn’t even new: “student swirl.”

It’s time college leaders “think about college the way students do,” Mellow says. Doing so could also help small colleges meet the enrollment and diversity challenges many are now facing. “Because we never acted as a system, these small liberal-arts colleges have never made a concerted effort to be partners with community colleges,” she says. If they did, they’d “immediately diversify the population” they enroll.

OK, I can already predict the response from small-college leaders on that diversity shot. But now you know why it’s fun to talk to Mellow. She retired in August. She isn’t sure what’s next, besides more reading for pleasure, but she says she will certainly continue her advocacy.”

Reprinted from The Edge Newsletter.