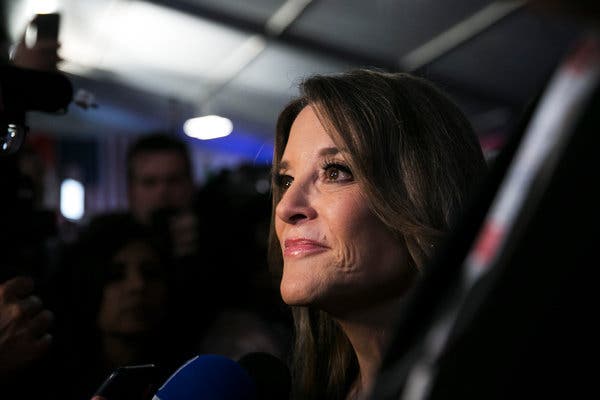 New York Times columnist, David Brooks, has a piece today entitled, Marianne Williamson Knows How to Beat Trump.  He provides insight into her comments on Tuesday during the Democratic Party Presidential Candidates’ Debate.  His message is that Williamson understands Donald Trump and the dark side that he has brought to the American presidency.  Essentially what we need to defeat him is an “uprising of decency.”  Below is Brooks entire column.  It is important reading for those hoping that the Democrats can defeat Trump in 2020.

He’s redefining what you can say and how a leader can act. He’s reasserting an old version of what sort of masculinity deserves to be followed and obeyed. In Freudian terms, he’s operating on the level of the id. In Thomistic terms, he is instigating a degradation of America’s soul.

We are all subtly corrupted while this guy is our leader. And throughout this campaign he will make himself and his values the center of conversation. Every day he will stage a little drama that is meant to redefine who we are, what values we lift up and who we hate.

The Democrats have not risen to the largeness of this moment. They don’t know how to speak on this level. They don’t even have the language to articulate what Trump represents and what needs to be done.

Part of the problem is that the two leading Democratic idea generators are both materialistic wonks. Elizabeth Warren is a social scientist from Harvard Law School who has a plan for everything — except the central subject of this election, which is cultural and moral. Bernie Sanders has been a dialectical materialist all his life and is incapable of adjusting his economics-dominated mind-set.

They are what Michael Dukakis would be if he emerged in an era when the party had swung left. This model has always had appeal to a certain sort of well-educated Democrat.

The bigger problem is simply the culture of the Democratic Party. The modern version of the party emerged during the Great Depression to solve one problem: material want. It is a secular party, trapped in a Lockean prison: Politics should be separate from faith. Politics should be separate from soulcraft. Democrats believe they can win votes by offering members of different groups economic benefits and are perpetually shocked when they lose those voters.

It is no accident that the Democratic candidate with the best grasp of this election is the one running a spiritual crusade, not an economic redistribution effort. Many of her ideas are wackadoodle, but Marianne Williamson is right about this: “This is part of the dark underbelly of American society: the racism, the bigotry and the entire conversation that we’re having here tonight. If you think any of this wonkiness is going to deal with this dark psychic force of the collectivized hatred that this president is bringing up in this country, then I’m afraid that the Democrats are going to see some very dark days.”

And she is right about this: “We’ve never dealt with a figure like this in American history before. This man, our president, is not just a politician; he’s a phenomenon. And an insider political game will not be able to defeat it. … The only thing that will defeat him is if we have a phenomenon of equal force, and that phenomenon is a moral uprising of the American people.”

They are unready for it, but it falls on the Democrats to rebuild the moral infrastructure of our country. That does not mean standing up and saying, “Donald Trump is a racist!” 500 times a day. It means reminding Americans of the values we still share, and the damage done when people are not held accountable for trampling on them. The values are pretty basic and can be simply expressed:

Unity: We’re one people. Our leader represents all the people. He doesn’t go around attacking whole cities and regions.

Honesty: We can’t have deliberative democracy without respect for the truth. None of us want congenital liars in our homes or our workplaces.

Pluralism: Human difference makes life richer and more interesting. We treasure members of all races and faiths for what they bring to the mosaic.

Sympathy: We want to be around people with good hearts, who feel for those who are suffering, who are faithful friends, whose daily lives are marked by kindness.

Opportunity: We want all children to have an open field and a fair chance in the great race of life.

Trump has put himself on the wrong side of all these values. So Democrats, go ahead and promote your plans. But also lead an uprising of decency. There must be one Democrat who, in word and deed, can do that.