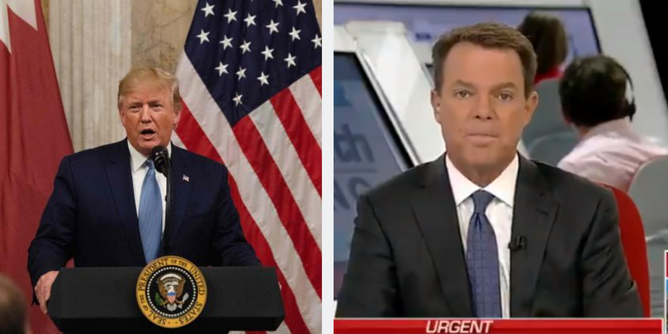 Fox News, President Donald Trump’s favorite news network not only cut into his speech yesterday, but it also fact-checked him on live television.

Trump attempted to tout his administration’s environmental record, but Fox News host Shepard Smith interrupted to say those policies have been “widely criticized by environmentalists and academics.”

The Fox News host cited a New York Times report that found that more than 80 environmental rules and regulations have been repealed and/or rolled back, including multiple regulations regarding drilling, air pollution and wildlife.

Then Smith listed some of them (see video below).

Though Trump has frequently touted the glowing coverage he’s received from Fox News hosts such as Sean Hannity and Tucker Carlson and is known to be a fan of the “Fox & Friends” morning show, he has lately complained about some of the network’s other figures, including Smith.

Over the weekend, Trump griped that watching Fox News is “worse than watching low ratings Fake News CNN” and MSNBC, then later took at dig at Smith for hosting “by far their lowest rated show.”

It’s not the news channel’s lowest-rated show, according to the latest numbers, and Smith has more than twice as many viewers as CNN in the same hour.

Go get him, Shep!

President Trump left out quite a few facts when talking about his environmental record today – but @ShepNewsTeam filled in the gaps on @FOXNews 👇 pic.twitter.com/kyOqwccQHS