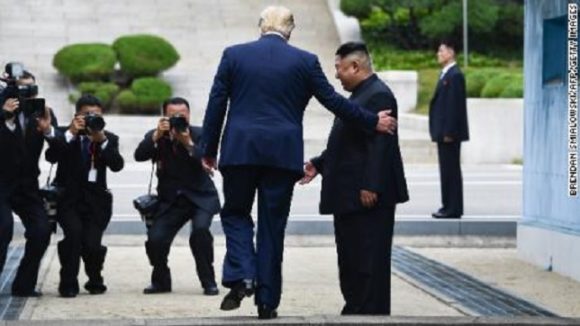 President Donald Trump made history yesterday by taking 20 steps into North Korea to meet with North Korean leader Kim Jong Un. He has received praise and criticism for being the first president to step inside North Korea.

Pope Francis saluted Trump and Kim and  hoped the “significant gesture” would be a stepping stone to the resolution of conflicts in the Korean peninsula and worldwide.

“In the last few hours we saw in Korea a good example of the ‘culture of encounter,’” the pope said, referring to one of his central teachings about the need to reach across physical and political boundaries to build friendships with others.

“I salute the protagonists, with a prayer that such a significant gesture will be a further step on the road to peace, not only on that peninsula, but for the good of the entire world,” Francis continued, according to Reuters.

On the other hand, for 2020 Democratic hopefuls, the event was nothing more than a “photo op” that hurt America more than it helped and elevated the image of a dictator.  For example:

Sen. Elizabeth Warren of Massachusetts said Trump shouldn’t be “squandering American influence on photo ops and exchanging love letters with a ruthless dictator,” in a tweet.

“Instead, we should be dealing with North Korea through principled diplomacy that promotes US security, defends our allies, and upholds human rights,” the Massachusetts Democrat wrote.

A spokesman for former Vice President Joe Biden told CNN in a statement, “President Trump’s coddling of dictators at the expense of American national security and interests is one of the most dangerous ways he’s diminishing us on the world stage and subverting our values as a nation.”  Andrew Bates said in the statement Trump “fawned over Kim Jong -un — to whom he’s made numerous concessions for negligible gain — joked with Vladimir Putin about our election security and ‘getting rid’ of journalists, and even expressed sympathy for Turkey buying Russian missiles.”

Julián Castro said Trump “haphazardly” meeting with Kim raises the dictator’s profile and is “strengthening him across the world,” while giving the US “nothing.”

“That is a problem,” Castro told CNN’s Brianna Keilar on “State of the Union” on Sunday.

“It’s all show, it’s all symbolism, it’s not substance,” the former secretary of Housing and Urban Development said, adding Trump “keeps telling us one thing, but the reality is another.”

Castro said he supports diplomatic conversations, but said Trump “seems bent on approaching this very erratically, very haphazardly” and pointed to how the meeting was put together “at the last minute.”

Castro added Sunday: “I’m not quite sure why this President is so bent on elevating the profile of a dictator like Kim Jong Un when Kim Jong Un has not lived up to his promise from the first summit.”

I agree most with Castro’s position that we should support “diplomatic conversations” but Trump does not seem to have a plan and instead is approaching this serious matter haphazardly.