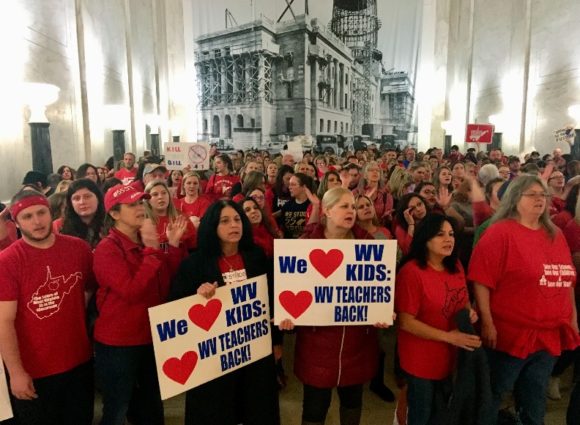 West Virginia teachers went on strike this past  February to protest a bill that would open up the state to charter schools and help students pay for alternatives to the public education system. They won that strike, and went back to work when the House of Delegates’ rejected the legislation.

Just four months later, history may repeat itself.  As reported by The Huffington Post:

“Earlier this month, the state Senate passed two bills similar to the one teachers protested in February, but with additional language that makes it more difficult for the educators to go on strike. The fate of the bills is again in the hands of the House of Delegates, which reconvenes today.

The bills represent the latest skirmish in a nearly two-year tug-of-war between local teachers and state legislators, during which teachers went on strike twice. The first walkout, in 2018, protested low pay and health care costs, and was teachers’ first in the state since 1990. It lasted nine days and helped spur a “red state revolt” across the country, as teachers in Kentucky, Oklahoma and elsewhere subsequently staged their own walkouts. The second strike in West Virginia earlier this year lasted just two days.

Now, during the summer break for public schools, teachers are getting ready to mobilize again.

The two education bills that the state Senate advanced promise a pay hike but would allow the establishment of charter schools and create education savings accounts that help families use public money to pay for private schools. One bill also specifies that strikes by public employees are illegal in the state and that the workers can be fired for such work stoppages. It also says school superintendents must keep schools open during walkouts.

The West Virginia Supreme Court previously ruled that teachers don’t have the right to strike. But in the recent labor strife local superintendents closed schools in anticipation of work stoppages, which took the onus off of the teachers.

In Arizona and Oklahoma, legislators also recently introduced bills that included new penalties for striking teachers, but the measures did not pass.

But GOP state Sen. Patricia Rucker, chair of the education committee, disputes that the report accurately reflects public attitudes. She said its findings were “slanted” by the large number of teachers who participated, and that respondents weren’t given proper clarification on the definition of charter schools and education savings accounts. She also noted that most indicated support for the idea of more flexibility in education.

Responding to criticism that the Senate bills represent reprisal against teachers, Rucker said in an email to HuffPost, “There is nothing retaliatory about local control or clarifying that our state does not allow for public employees to strike (as determined by our state Supreme Court). … There is nothing retaliatory in giving local counties the option to have charters, something the majority of the United States has already,”

The Republican-led bid in the West Virginia Senate has the support of Education Secretary Betsy DeVos.”

Get ready to wear red again!