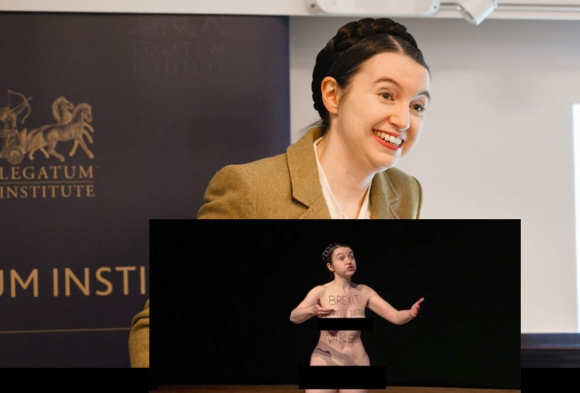 The Chronicle of Higher Education has a an article on Victoria Bateman, an economics historian at the University of Cambridge, who strips naked at various professional events to gain the attention of her male peers.  An inch shy of five feet, with a gentle  smile, she favors prim dresses and business jackets when she wears clothes.  As reported.

“Sometimes, to highlight economists’ obliviousness to women, she doesn’t, as at a March 2018 meeting of the Royal Economic Society. There she strode in to a gala reception “wearing,” as she puts it, “nothing but shoes, gloves, a necklace — and, of course, a smile.” She was “removed” after about 20 minutes, during drinks but before dinner. But on that night, among those economists, at least one woman was visible. And that was Bateman’s point.

“I didn’t choose,” she recalls, “to appear naked at such an event because it was unseasonably warm (it certainly wasn’t), nor due to a lack of suitable outfits in my wardrobe (I have a sizable collection at home), but because economics has a sex problem. If economists were going to stand up and listen, I knew it would require something more than a short conference speech of the kind I was scheduled to deliver the following day.”

She has also disrobed at recent appearances protesting Brexit  (video) in a lecture at a Cambridge theater (“Brexit leaves Britain naked” written in magic marker across her exposed front) and in a BBC interview. She appears au naturel, she says, to celebrate freedom and show solidarity with women — their minds, their bodies, and their vast unacknowledged contributions to prosperity.

Bateman, sometimes referred to as the Naked Don, has just come out with a book on these themes: The Sex Factor: How Women Made the West Rich (Polity Press). “Just because the written and spoken word is the usual means of academic communication, it doesn’t mean that we should restrict ourselves to them at all times,” she writes. “When I think about what has most powerfully affected my own thinking as an economist, on everything from poverty and prosperity to capitalism and the state, it is something else entirely: It is art.”

“If economists were going to stand up and listen, I knew it would require something more than a short conference speech.”

And art, or naked protest, is what she calls her unclad appearances, not just in person but in commissioned portraits by the painter Anthony Connolly at the prestigious Mall Galleries. The first of these caused a mild ruckus in 2014. Bateman explained in a Guardian op-ed that the painting was intended “to raise questions about the depiction of women and to challenge the blinkered association between the body and sex; to show that the female figure is something that a woman walks around with every moment in her life — that it is not, therefore, purely sexual.”

The second Connolly portrait (like the first, part of an annual exhibit by the Royal Society of Portrait Painters) was unveiled this month and features the 39-year-old Bateman seated, nude, reading a book. In the background is one repeated phrase: “Women who monetize their brains are denying other women the ability to monetize their bodies.”

That points to a second theme in Bateman’s work: the right of sex workers to make use of what the British sociologist Catherine Hakim calls “erotic capital” in the same way other women use their intellectual capital. This argument arose from the shaming Bateman has received for her nude activism. She was suddenly thrown into direct alliance with other women who dare to publicly and proudly acknowledge their physical selves. As Bateman explains, “my body, my choice” shouldn’t be the mantra only of certain ostensibly enlightened women with regard to birth control and abortion. “If a woman wants to make money from using her body,” she says, “why shouldn’t she?” If she wants to cover it with a burqa, that is her prerogative, as is revealing it in a short skirt or no clothing at all.”

Lady Godiva would be proud of Victoria.