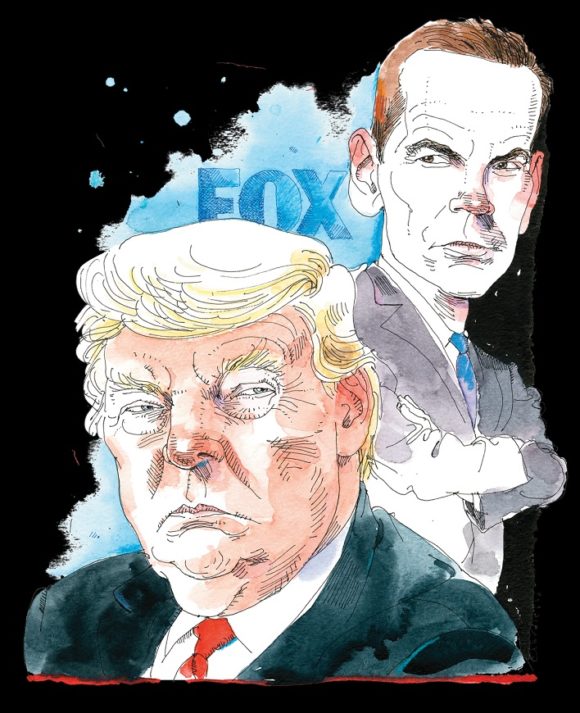 Over the weekend, Vanity Fair had a featured article describing the infighting going on at Fox News between the legitimate news journalists such as Shepard Smith and the evening right-wing, Donald Trump lackeys such as Sean Hannity and Jeanine Pirro.  Here is an excerpt:

“The [Fox News] network has never been more powerful—and at the same time so vulnerable. Fox programs influence Trump daily, but that has opened the network up to charges that it is State TV. Inside Fox, a long-running cold war between the network’s journalists and right-wing, prime-time hosts has turned hot. Fox journalists, bristling at being branded an arm of the Trump White House, are lobbying Fox News C.E.O. Suzanne Scott and president Jay Wallace to rein in Fox & Friends, Sean Hannity, Lou Dobbs, and Jeanine Pirro. “Reporters are telling management that we’re being defined by the worst people on our air,” a frustrated senior Fox staffer told me last month. News staffers are feeling emboldened to go after Trump in increasingly visible ways. Fox’s opinion hosts, meanwhile, have made the case that the prime-time lineup not only reflects the audience’s worldview but is responsible for the majority of the network’s advertising revenue and fees paid by cable companies that carry Fox. “We make the money,” an anchor close to Hannity told me. According to a source, prime-time staff complained to Fox management in March when a Muslim producer on Bret Baier’s staff tweeted criticism of Jeanine Pirro. “You can’t have a producer attacking talent. [Roger] Ailes would never have allowed that,” a prime-time staffer said. While Fox’s prime-time shows generate the lion’s share of the network’s ratings and ad revenues, there have been increasing issues with lost advertising. Many blue-chip companies don’t want to buy time on those shows because of the divisive pro-Trump content. “Executives are very worried Fox & Friends will be next. If advertisers start bailing on them, they’re screwed,” an insider said. Marianne Gambelli, Fox’s president of ad sales, responded: “Advertisers know the value of our loyal and engaged audience and we expect no change in our business going forward.”

The entire article is worth a read and provides insight into the machinations and conflicts between the legitimate journalists and the Trumpers at Fox News.  It also gives credence to accusations that much of what goes on at Fox is directed by Trump.