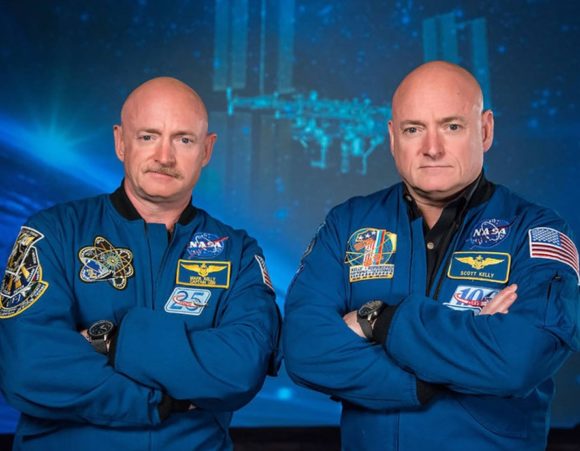 What happens to your body after nearly a year in space? Plenty. Most things return to normal once you’re back on Earth ― but not all of them.  That’s the findings of NASA’s “Twins Study,” the results of which were published Friday in the journal Science.    As reported:

The study tracked the physiological and cognitive changes of astronaut Scott Kelly as he spent 340 days in space, then compared them to his twin brother, Mark Kelly ― who is also a retired astronaut ― back home.

NASA collected and analyzed 317 stool, blood and urine samples from both Mark and Scott over the course of the year. It also tested such things as the twins’ memory, as well as their heart and eye function. (Scott also received a flu vaccine aboard the International Space Station ― the first vaccine ever administered in space ― and his body reacted appropriately. While aboard the ISS, his immune system was much more active than his twin, the study found.)

Although 559 people have gone to space, only eight have spent more than 300 consecutive days in orbit. This has led to a scarcity of information about what happens to the human body in microgravity over time ― important information to have if NASA is serious about sending humans to Mars in the coming decades. A trip to the Red Planet takes about 300 days.

Scott returned to earth roughly three years ago, and he is mostly back to his regular self, NASA found, including his immune system, cognition and microbiome. But 7% of his gene expression has yet to revert to its pre-flight status, potentially because of DNA damage due to increased radiation exposure.

And in another genetic surprise, the ends of Scott’s chromosomes ― a protective sequence called telomeres ― actually lengthened in space. Typically those get shorter as we get older, and their length is correlated with age-related health risks like heart disease and cancer.

“So, certainly we imagined, going into the study, that the unique kinds of stresses and extreme environmental exposures like space radiation and microgravity, all of these things, would act to accelerate telomere loss,” Susan Bailey, a researcher at Colorado State University and a co-author of the research, said at a press conference earlier this week. “We were surprised.”

But Bailey cautioned against getting your hopes up that NASA has stumbled across a cure for aging.

“I don’t think that [the elongation] can really be viewed as the fountain of youth and that people might expect to live longer because they’re in space,” she said.

NASA found that Scott’s telomeres shortened “within days of landing” back on Earth. It’s unclear why, exactly, though the explanation may be decidedly terrestrial: Scott’s diet in space contained more folate (vitamin B9), which likely played a role.

Overall, though, NASA researchers came away encouraged by the findings.

“The bottom line is,” Scott told Space.com, “from all these studies — and, granted, this is an experiment with one data point … would be that there’s nothing that we saw that would prevent us from going to Mars.”