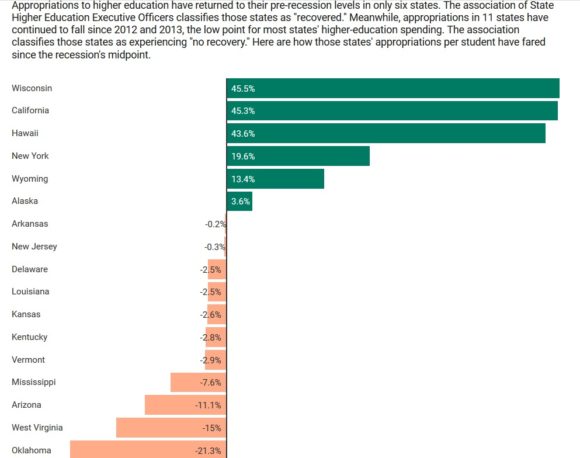 The Chronicle of Higher Education is reporting that after five straight years of growth in state support, nationally there was no change in state and local per student support for higher education.  Citing the 2018 “State Higher Education Finance” report, state appropriations per student remained essentially flat from the 2017 to 2018 fiscal years. In 11 states, higher-education appropriations have not recovered at all from the worst years of the Great Recession, according to the report released on Tuesday by the association of State Higher Education Executive Officers.   As reported.

“Tuition revenue, which had risen in all but two of the past 25 years, also remained flat compared with the previous fiscal year, the report said. State spending on student financial aid increased by nearly 9 percent, the fourth consecutive increase, according to the study.

Nationally, state appropriations, on average, fell more than $2,000 per student in the years after the recession, the report said, and remain nearly $1,000 below their pre-recession levels.

The situation is far worse in more than a fifth of states, where appropriations per student are still less than they were in 2012 or 2013, the low point for most state budgets. That’s after federal dollars — part of the $54-billion that went to states to avoid cuts in education spending — ran out, creating a fiscal cliff for public colleges.

Higher-education appropriations now exceed those before the recession in only six states: Alaska, California, Hawaii, New York, Wisconsin, and Wyoming.”