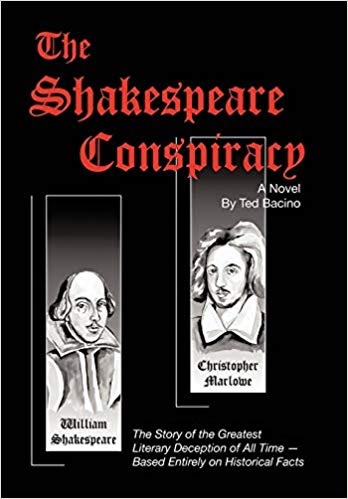 I have just finished reading  The Shakespeare Conspiracy – A Novel: The Story of the Greatest Literary Deception of All Time – Based Entirely on Historical Facts written by Ted Bacino.  I found it a quick enjoyable read as someone who was not familiar with the theory that Shakespeare did not write his plays but simply passed on those written by  Christopher Marlowe who faked his own death to avoid being tried for treason.

This novel, published in 2010, provides an interesting take on two questions that have plagued historians for centuries.  One, how could Christopher Marlowe, a known spy and England’s foremost playwright, be suspiciously murdered and quickly buried in an unmarked grave – just days before he was to be tried for treason?  And two, how could William Shakespeare replace Marlowe as England’s greatest playwright virtually overnight – when Shakespeare had never written anything before and was merely an unknown actor?

The reviews on it were mixed. Here is what one reviewer commented:

“This is a very well researched and meticulously thought out book. I was in awe at just how much work Bacino has put into this, with foreword, and massive appendices…

…and he’s clearly looked up every single point that he’s writing about, from plague to theatres to politics. I have to give Bacino a standing ovation simply for the work he’s done here with a foreword and a huge appendix but..

…the trouble is — it’s not really a novel. This book is really going only to appeal to historians, because those wanting an immersive novel are going to find the style jarring–as I did.

I found it fun and had trouble putting it down because I wanted to see how it would play out.  Try it!