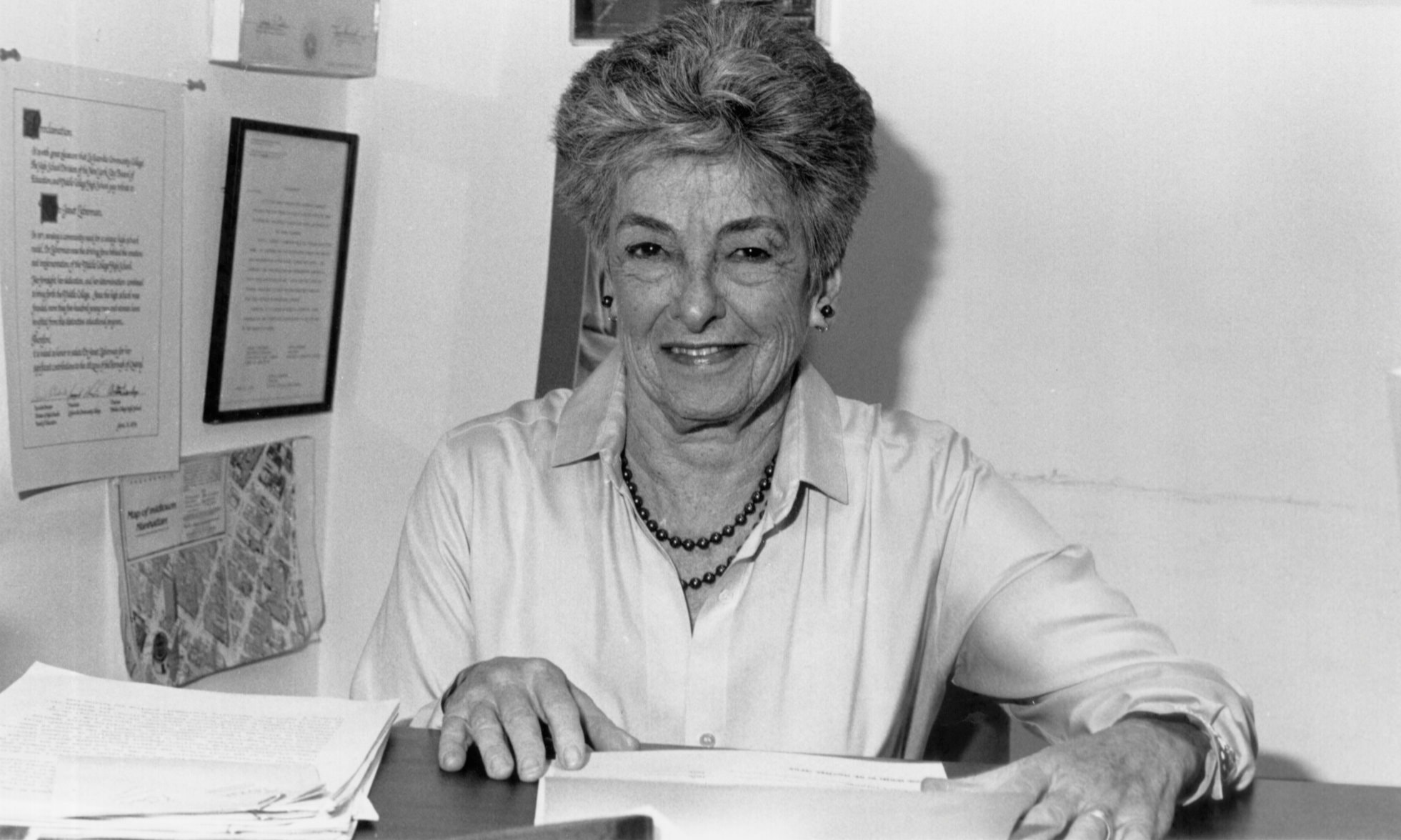 Janet Lieberman, an educational innovator who made college education more accessible to struggling high school students and recent immigrants died on March 19 in San Francisco. She was 97.  Dr. Lieberman devoted much of her career to the City University of New York and especially to LaGuardia Community College where she served as a guiding light from its inception in the 1970s.  Here is an excerpt from her New York Times obituary.

“Dr. Lieberman was present at the creation when Community College No. 9, as it was originally known, was named for Fiorello H. La Guardia, the transformative New York mayor from 1934 to 1945.

The college, part of the City University of New York, opened in 1971 in Long Island City in a refurbished plant where White Motor Company once made auto parts and Ford Instrument once manufactured range finders for naval weapons during World War II. The building was within wafting range of a Chiclets gum factory next door.

Dr. Lieberman not only helped shape the mission of LaGuardia, a two-year college that now enrolls some 45,000 students from 150 countries; she also established collaborations with other educational institutions to attract high school students who had struggled academically, or who had to hold down jobs while taking classes, or who could not afford a four-year college.

“Janet had a strong feeling that we in education were snobs and our bar was too low, and that race and class were factors in that,” said Richard K. Lieberman (no relation), a LaGuardia history professor and director of the LaGuardia and Wagner Archives, a repository of mayoral and other municipal records that Janet Lieberman helped organize.

“She knew that if we raised the bar, the students would come up to meet it,” he said.

In 1974, at a time when city officials were alarmed by plummeting high school graduation rates, Dr. Lieberman, in cooperation with the city’s Board of Education, founded the Middle College High School at LaGuardia, with support from the Ford Foundation.

The school, which couples small class sizes with intensive counseling, combines the last three years of high school with the first two of college. Typically after five years (but sometimes four), students graduate with an associate degree and can enroll in a four-year college, often transferring credits.

“The idea broke so many rules for whom community colleges should be serving, and how they might reach young, at-risk populations,” Anne-Marie McCartan wrote in “Unexpected Influence: Women Who Helped Shape the Early Community College Movement” (2017).

In the book, Ms. McCartan quoted Dr. Lieberman as saying, “We needed to make them learners and to make them aware of the possibilities.”

In 1983, Dr. Lieberman started the International High School on the LaGuardia campus for students new to the United States with limited knowledge of English.

She also teamed up with Vassar College in Poughkeepsie, N.Y., in 1985 to create the Explore Transfer program, which exchanged teachers between the colleges and enrolled LaGuardia students in Vassar classes during the summer to acclimate them to the four-year college experience and encourage them to apply there.

She added, “She saw opportunity where others saw none, and understood the powerful connection between boosting a young student’s self-confidence and their success.”

Janet Elaine Rubensohn was born on Oct. 2, 1921, in Flatbush, Brooklyn, the daughter of Samuel and Ida (Schubert) Rubensohn. Her mother was a schoolteacher and her father a manufacturer of Tiny Town Togs children’s clothing.

After graduating from the Berkeley Institute of Brooklyn, a prep school, she got a bachelor’s degree in economics from Barnard College in 1943 and a master’s from the City College of New York.

While she was in college, she married Allen Chase; their marriage ended in divorce. In addition to their son Randolph, she is survived by three grandchildren and four great-grandchildren. Another son, Gary Andrew Chase, died in 2007. Her second husband, Dr. Jerrold S. Lieberman, whom she married in 1957, died in 2008.

Dr. Lieberman was a public school psychologist, taught education and reading at Hunter College (also part of the City University) and earned a doctorate in educational psychology from New York University before she was recruited by LaGuardia in 1970.

“The challenge is what appealed to me,” she recalled later. “Status and money it was not.”

One of her first assignments was to reconcile the persistently steep high school dropout rate in New York City with a new policy that guaranteed high school graduates admission to the City University system.

She served as associate dean of the faculty and retired as professor emerita in LaGuardia’s social science department in 1991 but continued as special assistant to the president until 2000.

In “The Wisdom Trail: In the Footsteps of Remarkable Women” (2009), Dr. Lieberman and Julie Hungar profiled a range of accomplished women, each of whom, they wrote, “has made her mark and gained gratification by making a difference.”

In her case, Dr. Lieberman said in “Unexpected Influence,” “We made a college.”