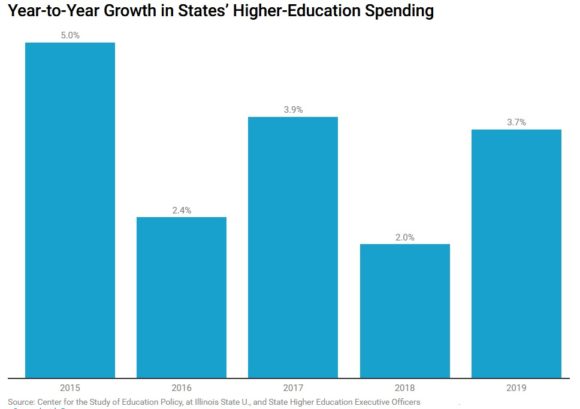 The Chronicle of Higher Education is reporting that state spending on higher education for the 2019 fiscal year grew almost 4 percent over 2018. As reported:

“The “Grapevine” survey, compiled by the Center for the Study of Education Policy at Illinois State University and the State Higher Education Executive Officers, found wide variations in states’ support for their colleges during the current fiscal year.

But over all, the increase in money for higher education follows a strong year for many state economies, which are projected to grow more than 4 percent in the 2019 fiscal year. Half of the states reported increasing higher-education spending by more than 3 percent for the current fiscal year, with Colorado showing the largest gain, at 12 percent, according to the survey.

Eighteen other states had increases in spending of less than 3 percent, according to a report on the survey.

The five-year trend for higher-education appropriations also continued to improve, the survey found. State spending on colleges has increased more than 18 percent since the 2015 fiscal year, with just seven states seeing declines over that period.”

This is very good news for our colleges and universities.