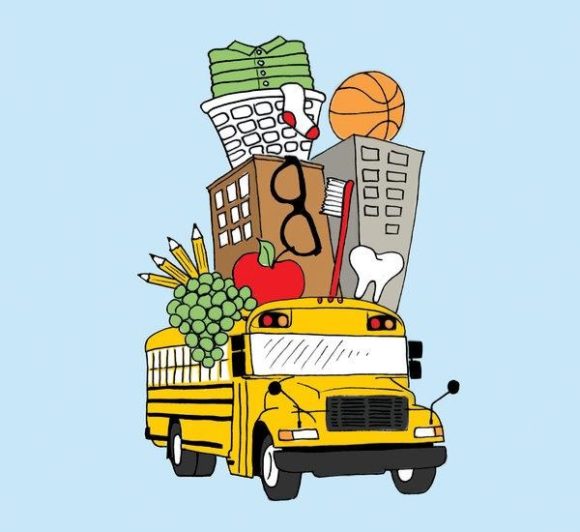 David Kirp, a professor of public policy at the University of California, Berkeley, has an op-ed in today’s New York Times commenting on the community school movement.  His basic message is that community schooling is growing and more education policymakers are looking at it as a model for urban schools.  Here in New York City, the model is slowing taking root. Below is an excerpt from the op-ed.

“Island School is one of 247 “community schools” in New York. These are regular public schools, with a twist. They have longer days and longer school years: Island stays open 12 hours a day, six days a week, including spring and winter breaks as well as the summer. A psychologist makes weekly rounds. A dentist comes by regularly. So does an optometrist, and students who need glasses get them free. (The retailer Warby Parker donates the glasses, a good example of a public-private partnership.)

Parents are ubiquitous at the school, learning computer skills, attending a “caring for the caregiver” class or picking up groceries from the food pantry. The school gives coats to their children, and washing machines on the premises allow them to keep their kids’ uniforms looking sharp. Pro bono lawyers are available to counsel families on immigration, housing and health insurance.

As a result, since 2014 chronic absenteeism at the school has been reduced by 6.5 percent. In 2018, 39 percent of students there passed the state reading exam (within hailing distance of the citywide average).

New York City, which has become the epicenter of the community school movement, rarely does things by halves. There were more than 100 community schools in 2016, when I first wrote about them, and since then, their number has roughly doubled. These are New York’s highest-need schools, with many more students who are poor, homeless or learning English than the citywide average.

As with any education innovation, this rapid expansion carries the risk that overall quality will deteriorate. That’s been the death of many well-intentioned ventures, and because the community school is Swiss-watch complicated, the possibility of failure looms large. The Island School is a small miracle. But is it the norm?

A 2017 RAND Corporation study of the first wave of New York’s community schools concluded that they are generally on the right track. They are staying open longer and finding new ways to help their students. They’re working with families and relying on mentors to persuade students of the value of education.

These practices are critical, according a 2017 report from the Learning Policy Institute (where I’m a senior fellow) and the National Education Policy Center. That study combed the voluminous research to identify the elements of a good community school. When schools both “support academic success and social, emotional and physical health” and “offer a promising foundation for progress,” the report concluded, research shows that students’ reading and math scores go up and they’re more likely to graduate. Fewer of them skip school. And they act out less often.

Most community school principals, the RAND evaluation noted, have built solid relations with partners — nonprofit groups, government agencies and businesses that can connect their school with essential services. But some reported feeling whipsawed between what they saw as competing priorities: giving students the extra support they need, versus increasing test scores.

“We’re mandated to do lots of different things,” one school leader complained. “There needs to be a real understanding of how much time do we have in a school day, in a school year.”

Many of the program’s kinks have since been ironed out, Chris Caruso, the executive director of New York’s community schools, told me. He said that “the investment we’re making will more than pay off over the long term.”

Still, no one is declaring victory. Attendance and graduation rates do lag behind the citywide average — after all, these schools aren’t serving youngsters in the city’s toniest neighborhoods — but by shrinking the gap they schools are promoting educational equity.

The community school approach represents a sea change, for it rejects the “no child left behind” belief that test scores are all that matter. Studies show that Americans are losing faith in that approach. In a 2018 survey of 3,000 adults, conducted by Columbia University Teachers College, two-thirds agreed that “students cannot develop basic academic skills without community resources, health and community services to students and families.” This isn’t a partisan issue — more than half of self-described conservatives concurred.

Across the country, the National Coalition of Community Schools reports, roughly 5,000 schools style themselves as community schools, and dozens of school districts have made the strategy systemwide. Mr. Caruso says he has been contacted by educators from a host of cities, including Los Angeles and Detroit. “They are figuring out how, not whether, to do this,” he said.

Those educators would do well to visit places like the Island School, to see for themselves the impact of a good community school on the lives of children.”

The community school is an idea whose time has come!