This week’s Science has an essay (see below)  reviewing what happened to the disruptive transformation of education that MOOCs promise six years ago.  Essentially the essay rightly concludes that the transformation did not happen and MOOC companies have been struggling to re-invent themselves as content providers to existing institutions. The conclusion of the authors is:

“MOOCs will not transform higher education and probably will not disappear entirely. Rather, they will provide new supports for specific niches within already existing education systems, primarily supporting already educated learners. The 6-year saga of MOOCs provides a cautionary tale for education policy-makers facing whatever will be the next promoted innovation in education technology, be it artificial intelligence or virtual reality or some unexpected new entrant. New education technologies are rarely disruptive but instead are domesticated by existing cultures and systems. Dramatic expansion of educational opportunities to underserved populations will require political movements that change the focus, funding, and purpose of higher education; they will not be achieved through new technologies alone.”

By Justin Reich and José A. Ruipérez-Valiente

When massive open online courses (MOOCs) first captured global attention in 2012, advocates imagined a disruptive transformation in postsecondary education. Video lectures from the world’s best professors could be broadcast to the farthest reaches of the networked world, and students could demonstrate proficiency using innovative computer-graded assessments, even in places with limited access to traditional education. But after promising a reordering of higher education, we see the field instead coalescing around a different, much older business model: helping universities outsource their online master’s degrees for professionals ( Display footnote number: 1 ). To better understand the reasons for this shift, we highlight three patterns emerging from data on MOOCs provided by Harvard University and Massachusetts Institute of Technology (MIT) via the edX platform: The vast majority of MOOC learners never return after their first year, the growth in MOOC participation has been concentrated almost entirely in the world’s most affluent countries, and the bane of MOOCs—low completion rates ( Display footnote number: 2 )—has not improved over 6 years.

MOOC providers explored several potential revenue models in their first years, but selling certificates of completion was the most prominent. In early public talks ( Display footnote number: 3, 4 ), Coursera cofounder Daphne Koller described their business model as a blue ccean strategy ( Display footnote number: 5 ): Rather than focus on existing consumers of higher education, they would sustain a new global service by converting nonconsumers of higher education—especially in places with limited access—into online learners at the world’s best universities. MOOC providers would make learning materials freely and widely available and would earn revenue from a portion of learners who purchased the opportunity to earn verified certificates and credentials.

Data on enrollment, intention, and completion show the challenges with this model.

We analyzed data from all MOOCs taught on edX by its founding partners MIT and Harvard University, from the start of the initiative in October 2012 to May 2018 (organized into annual cohorts starting in June). The dataset includes 565 course iterations from 261 different courses, with a combined 12.67 million course registrations from 5.63 million learners. Data from other edX partners or MOOC providers might reveal different dynamics, but we have a detailed view of two of the largest course providers.

MOOC researchers realized early on that most MOOC registrants leave soon after enrollment. Of those who register for a course, 52% never enter the courseware (table S4), and attrition typically remains high in the first 2 weeks of a course ( Display footnote number: 2 ). We see similar patterns when looking at engagement over multiple years. New individual learners increased from 2012 to 2016 but have declined since (see the first figure). The largest initial cohort was in 2015 to 2016, but only 12% of those 1.1 million individual learners took an additional HarvardX or MITx course in the following year. Second-year retention rates have declined with every cohort, from 38% in the first cohort to 7% in the 2016–2017 cohort. A growing global demand for ongoing learning from MOOCs that might have maintained a blue ocean strategy never materialized.

It was clear from the first few years of MOOC research that MOOCs disproportionately drew their learners from affluent countries and neighborhoods, and markers of socioeconomic status were correlated with greater persistence and certification ( Display footnote number: 6, 7 ). In 2012 to 2013, 80% of learners came from countries rated with high or very high United Nations Human Development Index ratings ( Display footnote number: 8 ). That proportion grew slightly through 2015 to 2016, so that the majority of new registrations and certifications came from the world’s most affluent countries (see the second figure). Rather than creating new pathways at the margins of global higher education, MOOCs are primarily a complementary asset for learners within existing systems. 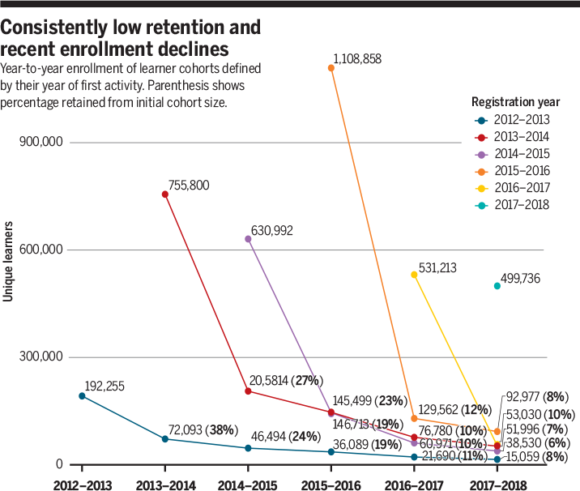 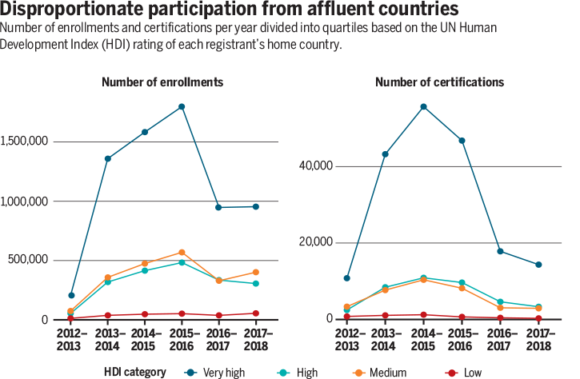 In light of these trends, financial sustainability for MOOC platforms may depend on reaching smaller numbers of people with greater financial means that are already embedded in higher-education systems rather than bringing in new nonconsumers from the margins.

In these initiatives, MOOC providers will compete with well-established, for-profit companies in helping universities to outsource their online degrees. For two decades, a class of companies called “online program managers” or “school-as-a-service” companies—Pearson Embanet, 2U, and Wiley Education Services—have supported colleges in creating online degrees ( Display footnote number: 1 ). Universities choose how much of the total student experience to outsource to these providers, who offer services that include marketing and recruitment, admissions, online course management, curriculum design, and course instruction and assessment. School-as-a-service providers typically earn revenue by taking a fraction of the tuition of each student enrolled.

MOOC providers are reorienting to compete directly with these companies in one market segment: professional master’s degrees, credentialed by near-top universities, in fields with well-established return on investment, such as data science, computer programming, business, and related fields. The primary competitive advantage of MOOCs relative to established school-as-aservice providers involves cutting labor costs through automation. Many “traditional” online programs include small class sizes, synchronous sessions with instructors, and human-graded assignments. Many degrees offered by universities with the technology and support of Coursera and edX will be onehalf or one-quarter as expensive as typical U.S. professional online credentials, with the bulk of savings coming from a combination of larger class sizes, fewer or no synchronous sessions, reduced contact with instructors, and more autograded assignments ( Display footnote number: 12 ).

Because MOOC platforms support programs that look more like “traditional” online higher education, the literature on online learning can provide guidance. By most indications, students typically do worse in online courses than in on-campus courses, and the challenges of online learning are particularly acute for the most vulnerable populations of first-generation college students, students from low-income families, and underrepresented minorities ( Display footnote number: 13 ). If low-cost, MOOC-based degrees end up recruiting the kinds of students who have historically been poorly served by online degree programs, student support programs will be vital. Some recent research has explored online and text-message–based interventions for supporting these students, but most research suggests that human connections through advisers, tutors, and peer groups provide the most important student supports ( Display footnote number: 14 ). These human supports will push against lower tuition costs. MOOCbased degree providers may find that highly effective online learning for diverse populations costs about the same to provide as highly effective residential learning ( Display footnote number: 12 ).

MOOCs will not transform higher education and probably will not disappear entirely. Rather, they will provide new supports for specific niches within already existing education systems, primarily supporting already educated learners. The 6-year saga of MOOCs provides a cautionary tale for education policy-makers facing whatever will be the next promoted innovation in education technology, be it artificial intelligence or virtual reality or some unexpected new entrant. New education technologies are rarely disruptive but instead are domesticated by existing cultures and systems. Dramatic expansion of educational opportunities to underserved populations will require political movements that change the focus, funding, and purpose of higher education; they will not be achieved through new technologies alone.