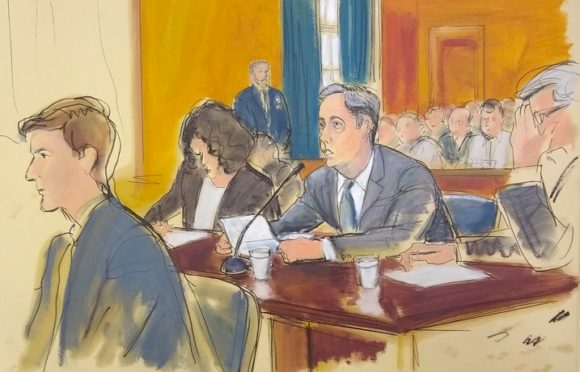 It’s been eight months since the FBI raided Michael Cohen’s New York law office and three since he pleaded guilty to illegal interference in the 2016 election. When all is said and done, the April raids by federal prosecutors targeting Michael Cohen’s office and other premises in Manhattan may be seen as a turning point for Donald Trump’s presidency. As reported in the New York Times:

“Those raids — and Mr. Cohen’s own malfeasance — opened the door for Robert Mueller, on Thursday, to convict President Trump’s longtime loyalist and personal lawyer of lying to Congress. What the special counsel has gathered since the raids provides the clearest proof yet to the American public that Mr. Mueller’s inquiry — derided by the president and his allies as an aimless fishing expedition — is rooted in the law and facts. To those critics, this latest move was surely meant to send another message as well: He’s not about to back down.

Mr. Cohen’s guilty plea, filed in the same federal courthouse where he already faces a steep sentence for orchestrating campaign-finance and other crimes, brings Mr. Mueller’s operation to New York, the heart of the president’s business empire and the self-made myth that propels it. If there’s anything that plea exposes, it’s that Mr. Trump’s mind never strayed far from his business dealings and how to further enrich himself and his family, even as he was campaigning for the nation’s highest office.

The facts to which Mr. Cohen admitted on Thursday don’t establish that Mr. Trump conspired with Russian efforts to win him the election, but they refute Mr. Trump’s frequent, vehement claim that he had nothing to do with Russia as he sought the White House. It was that falsehood that Mr. Cohen sought to protect by lying himself. “I made these statements to be consistent with” Mr. Trump’s “political messaging,” he said in court.

Well into the presidential race and as Mr. Trump’s chances of becoming the Republican nominee appeared certain, Mr. Cohen worked hard to get into the good graces of the Russian government — procuring meetings with high-ranking officials, planning trips for himself and Mr. Trump, and briefing the then-candidate and his “family members” on his progress.

These revelations, which Mr. Cohen concealed or obfuscated from congressional investigators conducting their own look into Russian election interference, put Mr. Trump at the center of an elaborate operation to build a Trump Tower in Moscow. Reporting by BuzzFeed News, published in May, had previously detailed a concerted push to bring the Trump real estate brand to Moscow’s skyline. The plan, in Mr. Cohen’s own words, was to fly Mr. Trump to the Russian capital “once he becomes the nominee after the convention.”

The trove of documents and communications that are the foundation of BuzzFeed’s report now appear to be in Mr. Mueller’s possession. Before long, they could form the basis for additional criminal charges against or inquiries into other Trump figures who have sought to minimize their own Kremlin connections, such as Donald Trump Jr. and Paul Manafort.

If investigating the Trump Organization and his business dealings was a “red line” for Mr. Mueller not to cross —  as Mr. Trump told The Times last year —  the special counsel blew right past it with Thursday’s charges. And with good reason: The conduct Mr. Cohen has attested to in his plea agreement and in open court falls directly within the special counsel’s mandate to pursue “any links” or “coordination between the Russian government and individuals associated with the campaign of President Donald Trump.”

Is there a clearer link to Russia than the involvement of President Vladimir Putin himself — as court documents now show — in a project meant to garner riches and a new edifice to a future American president?

Mr. Mueller’s interest in criminalizing lies and misdirections “within the jurisdiction of the legislative branch of the Government of the United States,” as Mr. Cohen’s charging document states, is an admonition to anyone who has testified on Russia before Congress — a body, despite its recent fecklessness, that, at least to Mr. Mueller, is meant to provide oversight of the executive branch on behalf of all Americans.

“I was campaigning. There was a good chance that I wouldn’t have won, in which case I would have gotten back into the business, and why should I lose lots of opportunities?” was how Mr. Trump explained away Mr. Cohen’s conviction on Thursday. It’s a deflection that the president will rely on again, if history is any indication: Hours before Mr. Cohen appeared in court, the president was, for the umpteenth time, ranting and raving about Mr. Mueller, accusing him of searching for crimes that don’t exist.

But, as Mr. Cohen’s guilty plea demonstrates, the crimes are real. What’s more, there are already numerous cases filed in various federal districts that will likely bare others. It’s only a matter of time before even Mr. Trump won’t be able to tweet them away. “

P.S.:  Bloomberg Reports and other media were also revealing yesterday that related to the Michael Cohen testimony was another story that the Trump organization offered Vladimir Putin, Russia’s President, a $50 million penthouse in a new Trump Tower to be built in Moscow.