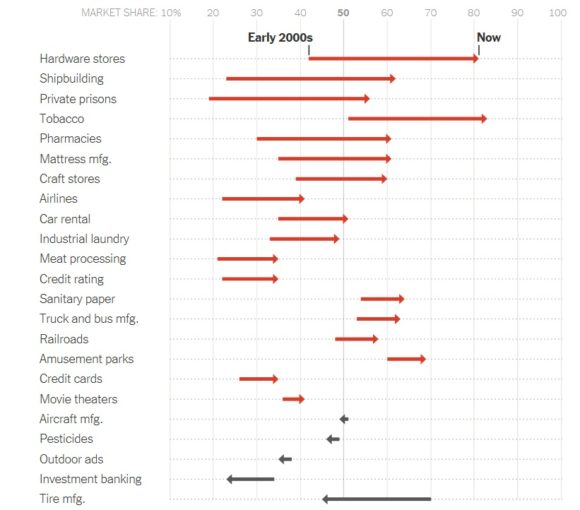 The combined market share of the two largest companies in many industries has grown in recent years, often because of mergers.

New York Times op-ed columnist, David Leonhardt comments today on how in the United States  one industry after another, big companies have become more dominant over the past 15 years.  The chart above illustrates that the market share of the largest companies has increased significantly.  The new corporate behemoths have been very good for their executives and largest shareholders — and bad for almost everyone else. Sooner or later, the companies tend to raise prices. They hold down wages, because where else are workers going to go? They use their resources to sway government policy. Many of our economic ills — like income stagnation and a decline in entrepreneurship — stem partly from corporate gigantism.

Leonhardt makes point after point in his column (see below in its entirety) and concludes by quoting Louis Brandeis: “We may have democracy, or we may have wealth concentrated in the hands of a few,” Louis Brandeis, the Supreme Court justice and anti-monopoly crusader, said a century ago, “but we can’t have both.”

The Monopolization of America

The popular telling of the Boston Tea Party gets something wrong. The colonists were not responding to a tax increase. They were responding to the Tea Act of 1773, which granted a tea monopoly in the colonies to the well-connected East India Company. Merchants based in the Americas would be shut out of the market.

Many colonists, already upset about taxation without representation and other indignities, were enraged. In response, dozens of them stormed three ships in Boston Harbor on the night of Dec. 16, 1773, and tossed chests of East India tea — “that worst of plagues, the detested tea,” as one pamphlet put it — into the water.

A major spark for the American Revolution, then, was a protest against monopoly.

A strong strain of anti-monopoly sentiment has run through our politics ever since. America was born as “a nation of farmers and small-town entrepreneurs,” the historian Richard Hofstadter once wrote, “anti-authoritarian, egalitarian and competitive.” Hostility to corporate bigness animated Thomas Jefferson and Teddy Roosevelt, as well as the labor movement, Granger movement, Progressive movement and more.

Of course, monopolies and other corporate giants have fought back against these assaults on their power, and sometimes succeeded for years or decades at a time. It happened during the age of Rockefeller and Morgan. Over the past 40 years, it has happened again.

The federal government, under presidents of both parties, has largely surrendered to monopoly power. “The ‘anti’ in ‘antitrust’ has been discarded,” as the legal scholar Tim Wu puts it in his new book, “The Curse of Bigness.” Washington allows most megamergers to proceed either straight up or with only fig-leaf changes. The government has also done nothing to prevent the emergence of dominant new technology companies that mimic the old AT&T monopoly.

This meekness has made possible the consolidation of one industry after another. For a long time, though, it’s been hard to figure out precisely how much consolidation. The available statistics just aren’t very good, which isn’t an accident. In 1981 — around the time that the Reagan administration was launching the modern pro-monopoly era — the Federal Trade Commission suspended a program that collected data on industry concentration.

Fortunately, researchers in the private sector have recently begun filling in the gaps. On Monday, the Open Markets Institute — an anti-monopoly think tank — is releasing the first part of a data set showing the market share that the largest companies have in each industry. You can see the main theme in the charts here: Big companies are much more dominant than they were even 15 years ago.

Mergers are one big reason. Another is the power of so-called network effects — in which the growth of, say, Facebook makes more people want to use it. True, a few industries have become less concentrated, but they are exceptions. If anything, the chart here understates consolidation, because it doesn’t yet cover energy, telecommunications and some other areas. It also doesn’t cover local monopolies, such as hospitals that are dominant enough to drive up prices.

The new corporate behemoths have been very good for their executives and largest shareholders — and bad for almost everyone else. Sooner or later, the companies tend to raise prices. They hold down wages, because where else are workers going to go? They use their resources to sway government policy. Many of our economic ills — like income stagnation and a decline in entrepreneurship — stem partly from corporate gigantism.

So what are we going to do about it? It’s time for another political movement, one that borrows from the Boston Tea Partiers, Jefferson, T.R. and the other defenders of the economic little guy.

The beginnings of this movement are now visible. Top Democrats believe that anti-monopolism can be a political winner for their party. It’s a way to address voters’ anxiety over high drug prices, digital privacy and more. “The control of business over certain segments of the economy,” says Senator Amy Klobuchur of Minnesota, a potential presidential candidate, “I think it will be a much bigger thing going into 2020.”

Klobuchar has offered a good bill that would raise the legal standards for merger approval. But preventing future mergers won’t be enough. Eventually, the government will probably need to break up existing giants, as it did to the old AT&T and Standard Oil. One obvious candidate is Facebook, which has gobbled up Instagram, WhatsApp and other businesses.

And corporate bigness doesn’t need to be a partisan issue. Senator Mike Lee of Utah is among the Republicans who have expressed concern about it. Conservatives, after all, are supposed to care about the ideals that monopolies undermine — like market competition, economic dynamic and individual freedom. Ultimately, monopolies aren’t only an economic problem. They are also a political one.

“We may have democracy, or we may have wealth concentrated in the hands of a few,” Louis Brandeis, the Supreme Court justice and anti-monopoly crusader, said a century ago, “but we can’t have both.”