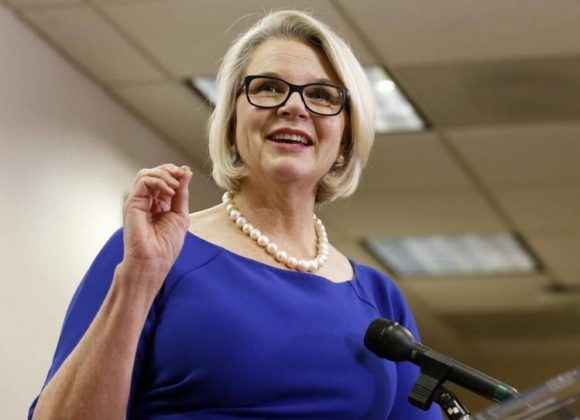 The Chronicle of Higher Education and local media are reporting that Margaret Spellings is resigning as president of the University of North Carolina system, after three years in which she moved forward with major changes aimed at increasing affordability and accountability, and simultaneously became mired in a series of culture-war controversies.  As reported:

“Spellings, who served as education secretary under George W. Bush, has been negotiating her departure with the system’s governing board and could leave as soon as early next year, according to The News & Observer, a newspaper in Raleigh, N.C. One motivation is a desire to return to Texas, her home state, the paper reported.

Doyle Parrish, a board member, confirmed to the Triangle Business Journal that Spellings would resign and said he believes she’s doing so for two reasons: the “turbulent experience” she has had in a politically charged climate, and a “divisive board.” Marty Kotis, another board member, told The Chronicle that he couldn’t confirm anything about Spellings, but called Parrish’s decision to talk to the newspaper “inappropriate” and said “he should know better.”

The board will meet in an emergency session on Friday to consider an “executive personnel matter,” according to an advisory from the system’s office. A spokesman declined to provide more information.

Spellings came to North Carolina in early 2016 after her predecessor, Thomas W. Ross, was pushed out by the board, a decision that many saw as politically motivated. Ross was a Democrat, while most board members, appointed by the Republican-controlled state legislature, were not.

Spellings was attracted to the UNC job in large part because she wanted to spearhead a conversation about higher-education affordability and accountability in a state that, in her view, was eager to have one. As education secretary, she oversaw the creation of a group, known as the Spellings Commission, that issued a landmark report on the future of higher education.

And she believed the opportunity for investment was there. Despite years of state-funding declines, the UNC system continues to receive a higher share of its budget from the legislature than public institutions in many other states. UNC’s board, meanwhile, wanted to hire someone who could repair a fractured relationship with state lawmakers.

Spellings was initially greeted with major protests by angry students and faculty members who disagreed with the board’s decision to push out Ross and who saw her as someone who wasn’t an academic and wouldn’t be sympathetic to their concerns. That activism eventually died down.

But Spellings quickly found herself in the midst of heated debates over the nation’s changing culture and resistance to it, particularly among conservatives, in North Carolina. Weeks after she took office, state legislators enacted a law that forced transgender people to use restrooms and other public facilities consistent with the gender they were assigned at birth. (Parts of the law were later repealed.) The result on UNC campuses was an uproar.

There were debates over undocumented students and free speech on campus. And there was the lightning rod of Silent Sam, the Confederate monument on the Chapel Hill campus that protesters pulled down in August.

Navigating such thorny issues was not a role Spellings relished.

“When I look up three years from now, at the end of my contract,” she said in an interview this year, “I want to be able to put some points on the board with respect to: How many more people have a college education, have that opportunity to have the American dream? Not: How did we deal with a protest at a monument, or whatever, on such and such a day?”

Still, she managed to cut through the noise at times and focus on accountability and affordability. In the spring she traveled across the state, speaking on multiple UNC campuses about her vision for a university that did a better job of educating such underserved groups as first-generation and adult students.

This fall she’s been touting the early successes of a program called NC Promise, which sharply reduced tuition on three campuses to try to increase access and enrollment.

“We obviously do a great job educating elite kids who’ve had every advantage in the world. But that’s not our sole customer any longer,” she said. “Higher education used to be basically of, by, and for elites, and you could make a really good living without a higher education. And that’s just less and less true.”

By increasing degree attainment, Spellings hoped the system’s universities would help propel their local communities — many of them struggling amid broader economic shifts — into the 21st century. She often brought up concerns about the growing economic divide in North Carolina that was leaving the state’s poorest residents in the dust. She also created a commission, called My Future NC, to set goals for statewide educational attainment.

Each UNC campus recently signed performance agreements with the system office that outlined specific goals for improving graduation rates and other gauges of student success. Hard numbers, Spellings said, are key to building trust in higher education. “We need to understand how well we do what we do,” she said. “It’ll help us make our case to an ever-skeptical public.”

Part of what imperiled Ross, her predecessor, was a power struggle with UNC’s board, whose leaders tried on a number of occasions to assert themselves more aggressively and to intervene in campus-specific matters.

Though Spellings agreed more with board members politically than Ross did, she sparred with them, too — over a contentious search for the chancellor of Western Carolina University, and over publicly asking the state’s governor to help decide the fate of Silent Sam without consulting the board first.

Silent Sam, a statue of a Confederate soldier, dominated the main entrance of the University of North Carolina at Chapel Hill for more than a century, despite decades of protests. But suddenly, in August 2018, the statue was yanked down by protesters. Here’s how Silent Sam moved from dominance to disappearance.

Members of the board proposed reorganizing her staff and moving the system’s office out of Chapel Hill. Spellings, meanwhile, stressed on several occasions that the board should stay in its lane. She also talked about the challenges of leading UNC amid the many competing entities involved in the governance of higher education in North Carolina, including multiple boards, lawmakers, and chancellors.

Today the vast majority of the search-committee members who hired her, in 2015, are no longer on the system’s 28-member board. Spellings expressed frustration this year that she’d had to sell the board on her goals over and over again. During her first two years as president, she led a strategic-planning process. “Then a new cast of characters shows up, and they’re like, That’s not my strategic plan,” she said.

David Powers, who serves as chair of the board’s governance committee, acknowledged those tensions in an interview this year. “She is a very strong executive,” Powers said. “That might cause her to butt heads with board members every now and then, who are also very strong-minded.” At times, he said, board members felt as if they weren’t being kept in the loop about her plans.

But Powers had high praise for Spellings. “She’s adept at managing a big board that definitely has its own ideas about how to do some things,” he said, and she secured more state funding from the legislature last year than the university had received in years.

“I know people said, Oh, there are people on the board who want her gone,” he added.