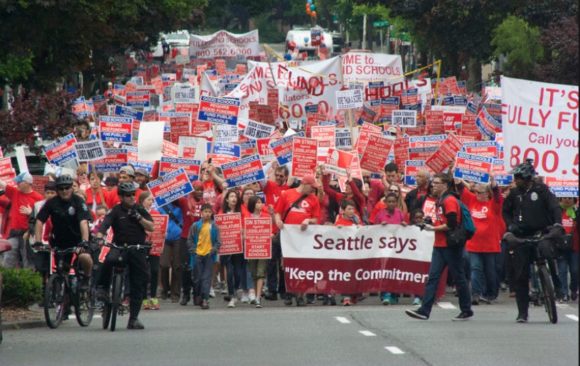 This past year was marked by the number of state and local teacher strikes. The strikes were greeted with a good deal of public support in West Virginia, Kentucky, Oklahoma, Arizona, Colorado, and Washington. It was generally recognized that  the teachers had legitimate concerns especially with regard to salaries. Teacher pay is low compared to other college-educated professionals, and has fallen over time.   According to data tracked by the National Education Association (NEA), in 2016–2017,  average teacher pay nationally was $59,660. In the states where teachers have walked out, average pay is generally substantially lower than that. For instance, Kentucky’s teachers rank 29th nationally at $52,338; Arizona’s teachers 44th at $47,403; West Virginia’s 49th, at $45,555; and Oklahoma’s 50th, at $45,292.  As a result of their activism,  the number of teachers seeking public office in the upcoming elections has skyrocketed.   As reported by The Huffington Post:

“The widespread teacher protests that swept through states like Kentucky and West Virginia this spring have given way to an unprecedented wave of educators pursuing political office in November’s elections, the nation’s largest teachers union said in a memo released this week.

Nearly 1,500 current or former teachers and other education professionals are running for elected offices across the country, the National Education Association said in the memo. That updated an analysis from September, when the NEA said more than 500 teachers and educators had decided to run for office. The new number is a record for the number of educators seeking office in a single election cycle, the union said.

The new figure includes at least 1,455 teachers and educators who are seeking state legislative seats, and counts current and former teachers from K-12 and higher education, as well as administrative and support staff. More than 1,000 of them are running as Democrats, with another 433 running as Republicans, the NEA said. Most of them are women.

“Our students deserve better than tattered textbooks and leaky ceilings,” Carrie Pugh, the NEA’s senior political director, said in the memo circulated among its members. “Educators deserve better than bottom-of-the-barrel pay and having to pay out of pocket for basic classroom supplies.”

Along with running for office, teachers are also providing a groundswell of grassroots support for other pro-public education candidates: A union spokesman said its members have more than doubled their activism this election cycle compared with 2016, as measured through time put in phone-banking and canvassing.

“We fully expect those numbers … to go up as we head down the stretch,” he added.

Massive teacher walkouts, protests and strikes took place in West Virginia, Kentucky, Oklahoma, and Arizona  this spring, as educators pushed back against decades of cuts to public education budgets, teacher salaries, and in some cases, changes to public pension and retirement plans. Walkouts also occurred in Colorado and North Carolina.

Those walkouts, which were largely organized at the grassroots level and became known as the #RedForEd movement, won some immediate gains in states like West Virginia and Arizona, and staved off deeper cuts elsewhere.

The bulk of teachers seeking office are doing so in the states that experienced protests, according to the union ― a phenomenon that became evident amid the walkouts. Kentucky’s protests helped inspire a record number of teachers to sign up to pursue state legislative seats.

But the protests and the issues underlying them have also inspired teachers in other states. There are also at least 20 current or former teachers running for U.S. Congress or Senate seats, and multiple other educators involved in governor’s races and other statewide campaigns.

The teachers running for office include incumbents like Sens. Jon Tester (D-Mont.) and Bob Casey (D-Pa.), as well as first-time candidates like Jahana Hayes, who is running for a congressional seat in Connecticut, and John Mannion, who is pursuing a New York state senate seat.

The teacher movements have already shaken up Democratic primaries and other races across the country, from Colorado to Georgia. In Kentucky, a high school teacher defeated the state’s House majority leader in a GOP primary upset in May. And in response to the walkouts, congressional Democrats also unveiled a plan to devote $100 billion in federal funding to state school budgets. The proposed legislation would also guarantee teachers the right to join unions and collectively bargain.

Victories for teachers in November could further reshape state legislatures and debates over public education at the state and local level. But the NEA is also hopeful that increased activism among its members and other teachers will help boost candidates who have made improved public education a centerpiece of their campaigns.”

We wish our teachers well in their bid for public office.