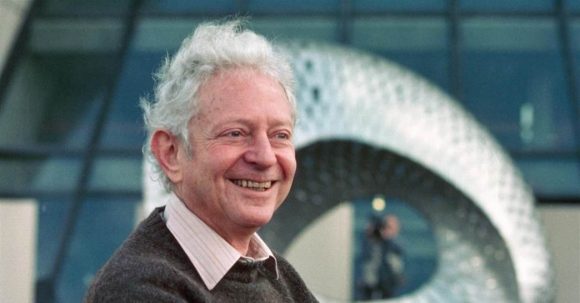 Leon Lederman, whose ingenious experiments with particle accelerators deepened science’s understanding of the subatomic world, died early yesterday in Rexburg, Idaho. He was 96.

Dr. Lederman and two colleagues demonstrated that there are at least two kinds of particles called neutrinos (there are now known to be three), a discovery that was honored in 1988 with a Nobel Prize in Physics. He went on to lead a team at the Fermi laboratory, in Batavia, Ill., that found the bottom quark, another fundamental constituent of matter.

For those baffled by such esoterica, Dr. Lederman was quick to sympathize.

“ ‘The Two Neutrinos’ sounds like an Italian dance team,” he remarked in his Nobel banquet speech.

Here is an excerpt from his obituary that appears this morning in the New York Times:

Leon Max Lederman was born on July 15, 1922, in Manhattan, where his parents, Morris and Minna (Rosenberg) Lederman, Jewish immigrants from Russia, ran a laundry business. Leon grew up in the Bronx and graduated from James Monroe High School in 1939 and from City College of New York in 1943. His bachelor’s degree was in chemistry, but by then he was already finding himself drawn to physics.

After serving in France during World War II with the Army Signal Corps, he entered the graduate school of physics at Columbia University, where he received his Ph.D. in 1951. He was soon working at the school’s new particle accelerator, just up the Hudson River at the Nevis Laboratories in Irvington, N.Y.

It was there in 1957 that he performed his first eye-catching experiment. Two theorists, Tsung-Dao Lee and Chen-Ning Yang (who shared the Nobel Prize that year), had speculated, amid widespread skepticism, that the weak nuclear force, which is involved in radioactive decay, might violate a law of physics called conservation of parity.

This idea is sometimes explained metaphorically with the example of a mechanical clock. Built in its mirror image — with the gears turning counterclockwise instead of clockwise and the numerals on the face reversed — it would still indicate the proper time.

When it comes to left or right and clockwise or counterclockwise, the law of conservation of parity holds that the universe doesn’t care one way or the other. Physicists had widely assumed that this equivalence held true for all the forces of nature, whether at the scale of galaxies or on the subatomic realm.

During a regular Friday lunch at a Chinese restaurant near Columbia, Dr. Lee told Dr. Lederman and some other associates that the physicist Chien-Shiung Wu had just completed an experiment that appeared to show that the weak force, unlike the others, indeed violated parity. During the decay of a nuclear isotope, gamma rays were more likely to be emitted in one direction than the other.

After heading upriver that evening to the Nevis Laboratories, Dr. Lederman and Richard Garwin, along with a graduate student, Marcel Weinrich, worked through the weekend and confirmed Dr. Wu’s discovery using a different experimental approach.

That clinched the deal, and the violation of parity caused a sensation. An exception had been found to a fundamental physical law. The universe was stranger than it seemed.

Dr. Lederman recalled the thrill of finding a new phenomenon in an interview in 1981 with the Times science writer Malcolm W. Browne in Discover magazine. “The best discoveries always seem to be made in the small hours of the morning, when most people are asleep, where there are no disturbances and the mind becomes most contemplative,” he said.

“You’re out in a lonely spot somewhere, looking at the numbers on reams of paper spewing out of a computer,” he continued. “You look and look, and suddenly you see some numbers that aren’t like the rest — a spike in the data.

I had the privilege of meeting Dr. Lederman twice in the 1990s while working on a grant to encourage minority students to consider teaching as a career.  He was a joyful man with keen insight into physics as well as life.  He would tell stories of growing up in the Bronx and going to public schools.

May he rest in peace.