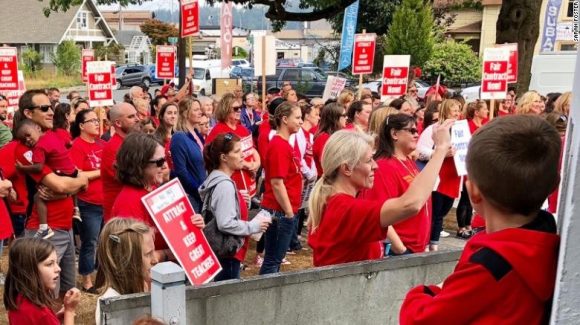 While most of us were enjoying the long Labor Day weekend, teacher unions in the Northwest were busily negotiating with school district administrators trying to resolve differences and open schools in time for the new academic year.

“School is expected to resume in Vancouver, Washington on Wednesday after teachers reached a tentative agreement for a new contract, according to a statement on the school district’s website.

The Vancouver Education Association will vote Tuesday on a new contract for teachers, counselors and other education professionals that was agreed upon by their representatives Sunday, Vancouver Public Schools said.

“Unlike other districts that only had to address teacher salaries, VEA and VPS had to negotiate an entire contract,” said VPS Superintendent Steve Webb. “I am grateful to the bargaining teams for working very hard together to come to an agreement. And, I especially want to thank our teachers and staff, parents and community members for their patience and understanding as we completed this difficult process.”

The district, which serves 24,000 students, said details of the agreement would be released after ratification.

Vancouver is one of a number of Washington school districts where educators were on strike last week. The Vancouver school district’s announcement of an agreement follows Friday’s news that teachers in Seattle had also reached a tentative deal to start school September 5 as scheduled in that district.

More than 53,000 students will also begin school Wednesday as they had planned after the Seattle Education Association and Seattle Public Schools reached a tentative deal Friday, the district and the teacher’s union said.

The district did not make public the terms of the agreement but said one of its priorities was educators’ compensation.

“We believe our educators and support staff deserve a competitive, fair salary package and as a district we want to be able to attract and retain the very best educators for our students,” the district said in a statement.

Students in grades 1-12 are expected to begin classes Wednesday, while kindergarteners are scheduled to start September 10.

“Our staff are our heroes,” the district said.

The Seattle deal came a few days after teachers voted to give their union the power to call a strike.

The Seattle Education Association said its members will vote on the deal at a meeting next week — but the tentative deal is enough to start school as scheduled.

Disputes over salaries and benefits for teachers remain unresolved at schools in some other Washington communities.

In Monroe, about 30 miles northeast of Seattle, it’s not clear whether school will start as scheduled on Wednesday. Teachers there rallied this week demanding better pay.

We need to support our teachers and our children’s educations.