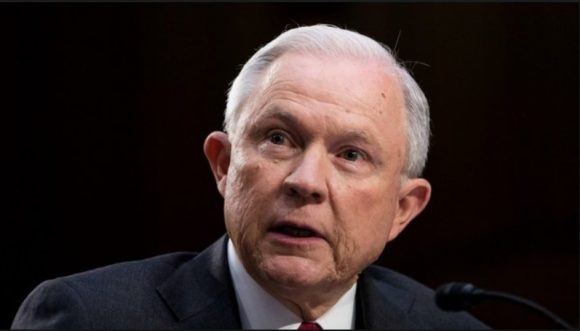 In a rare show of defiance, Attorney General Jeff Sessions responded to President Trump’s recent criticism of him and the Justice Department by stating that “While I am Attorney General, the actions of the Department of Justice will not be improperly influenced by political considerations.”  While I do not agree with the policies Sessions has initiated in the Department of Justice, it is good to see somebody in the administration showing some gumption in response to Trump and his bullying tactics.  As reported by The Huffington Post:

“Attorney General Jeff Sessions shot back at President Donald Trump on Thursday after Trump told a “Fox & Friends” host that his attorney general “never took control” of the Justice Department.

In a statement issued through a spokeswoman before he arrived at the White House for a meeting on criminal justice reform, Sessions said he took control of DOJ the day he was sworn in, adding that he has had “unprecedented success at effectuating the President’s agenda.” Sessions defended Justice Department prosecutors and said DOJ wouldn’t be improperly influenced by politics when he was the nation’s top law enforcement official.

“While I am Attorney General, the actions of the Department of Justice will not be improperly influenced by political considerations,” Sessions said.

Trump’s feud with Sessions has lasted more than a year. The president blamed Sessions for Deputy Attorney General Rod Rosenstein’s appointment of special counsel Robert Mueller in the spring of 2017, shortly after Trump fired FBI Director James Comey. Sessions even wrote up a resignation letter at one point last year, but DOJ has said releasing it would violate the attorney general’s privacy. More recently, Trump has called on Sessions to “stop this rigged witch hunt” ― referring to the Mueller investigation ― and said Sessions is “scared stiff.”

In a “Fox & Friends” interview that aired Thursday morning, Trump said he only gave Sessions the job because he “felt loyalty,” and that he might need to intervene in the operations of the Justice Department more than he already has.

As his statement suggested, Session has been remarkably successful at reshaping the Justice Department’s priorities to benefit Trump’s political agenda.

On immigration, for example, Sessions has directed more resources toward prosecuting immigration cases and used his power over immigration courts to make it harder for many Central Americans to receive asylum. He has also effectively ended the work that the Civil Rights Division was doing on police reform and killed another police reform program being run by DOJ’s Community Oriented Policing Services Office. Sessions has also rolled back Obama-era sentencing reforms and reversed an Obama-era policy that curtailed DOJ’s use of private prisons.

All that hasn’t been enough to satisfy Trump, who has publicly longed to have more control over prosecutorial decision-making at the department by encouraging DOJ to easy up on his political allies and go after his political opponents. Trump’s extensive campaign against the FBI and the Justice Department has had a tremendous impact on his supporters’ view of federal law enforcement, with many Trump voters now believing that the FBI and DOJ are biased against his administration.”

Congratulations Mr. Sessions.  His full statement is below.

I took control of the Department of Justice the day I was sworn in, which is why we have had unprecedented success at effectuating the President’s agenda—one that protects the safety and security and rights of the American people, reduces violent crime, enforces our immigration laws, promotes economic growth, and advances religious liberty.

While I am Attorney General, the actions of the Department of Justice will not be improperly influenced by political considerations. I demand the highest standards, and where they are not met, I take action. However, no nation has a more talented, more dedicated group of law enforcement investigators and prosecutors than the United States.

I am proud to serve with them and proud of the work we have done in successfully advancing the rule of law.