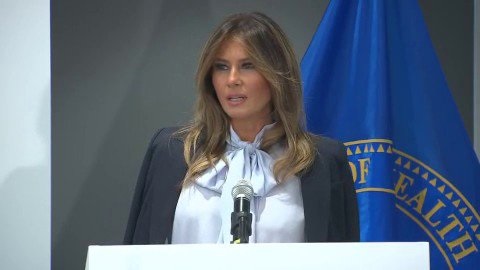 “In today’s global society, social media is an inevitable part of our children’s daily lives. It can be used in many positive ways, but can also be destructive and harmful when used incorrectly,” Melania Trump said in her opening remarks as she addressed a panel featuring youth activists, social media executives, law enforcement officials and educators.

“That is why Be Best chooses to focus on the importance of teaching our next generation how to conduct themselves safely and in a positive manner in an online setting,” she added, referring to her initiative on children’s issues.

Trump also emphasized that children who use social media should be included in conversations about potential solutions.

“By listening to children’s ideas and concerns, I believe adults will be better able to help them navigate this often-difficult topic,” she said. “Let’s face it: Most children are more aware of the benefits and pitfalls of social media than some adults.”

Trump’s focus on cyberbullying as part of Be Best has long been the source of criticism and mockery, given her husband’s regular stream of Twitter attacks.

“She is aware of the criticism but it will not deter her from doing what she feels is right,” the first lady’s spokeswoman, Stephanie Grisham, said in a statement to reporters.

Just hours before Melania’s remarks, the president again took aim at Mueller and his team, calling them a “group of Angry Democrat Thugs” in response to a New York Times story about White House counsel Don McGahn cooperating with Mueller’s team as part of the probe into whether Trump obstructed justice.

Last week, the president referred to his former aide Omarosa Manigault Newman, once the only African-American woman among the senior White House staff, as a “crazed, crying lowlife” and “that dog.”

I wonder if Melania and her husband talk to one another about their differences of opinion. One of them does not get what the other is saying and doing!  Hypocrisy anyone!