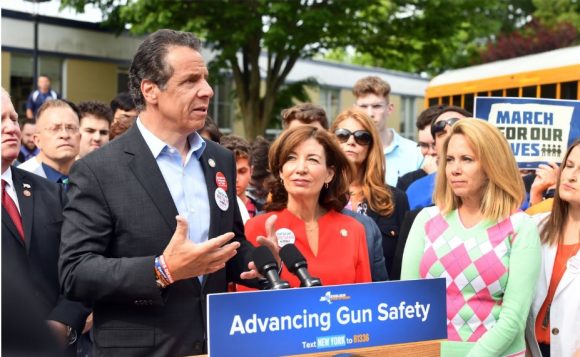 Gov. Andrew Cuomo says he’s fine with New York financial regulators putting the squeeze on the National Rifle Association which is claiming it may go bankrupt because New York State is pushing banks and insurers from doing business with it.  The powerful gun-rights group claims it’s facing financial ruin due to a full-frontal assault from the Cuomo administration.  In a recent court filing, the NRA said it suffered tens of millions of dollars in damages as a result of the state’s campaign to dissuade banks and insurance companies from doing business with the gun-loving group.

Cuomo and his state regulators “seek to silence one of America’s oldest constitutional-rights advocates,” the National Rifle Association said in the July 20 court filing. “If their abuses are not enjoined, they will soon, substantially, succeed.”

“If the NRA goes bankrupt because of the state of New York, they’ll be in my thoughts and prayers,” Cuomo said in a statement Saturday

One of the NRA’s worries is the state’s push against its Carry Guard insurance program, which is meant to protect gun owners from lawsuits when they fire their weapons in self-defense.

The state says Carry Guard policies are illegal. “People go to jail for selling illegal products, so I have very little sympathy for them,” Cuomo said at an event in the Bronx.

New York on Friday moved to dismiss the NRA lawsuit.

Cuomo hopes other states take up his anti-NRA fight. “They are political bullies — they control the president and they control most state legislators and most governors,” he said. “They don’t control me and never will.”

Poor, poor NRA.  May it rest in peace!