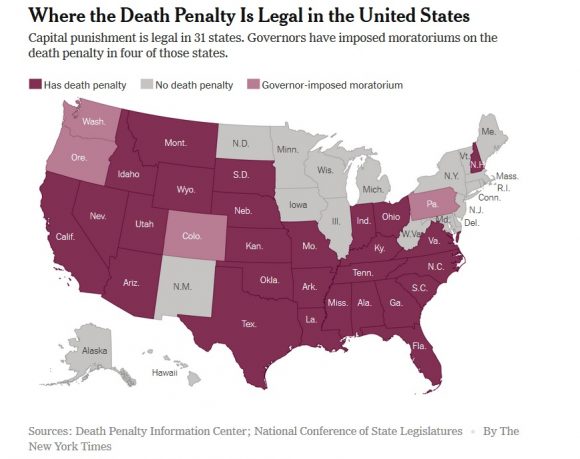 Yesterday, Pope Francis declared the death penalty wrong or “unacceptable” in all cases, a definitive change in church teaching that is likely to challenge American Catholic politicians, judges and officials who have argued that their church was not entirely opposed to capital punishment.  As reported in the New York Times:

“Before, church doctrine accepted the death penalty if it was “the only practicable way” to defend lives, an opening that some Catholics took as license to support capital punishment in many cases.

But Francis said executions were unacceptable in all cases because they are “an attack” on human dignity, the Vatican announced on Thursday, adding that the church would work “with determination” to abolish capital punishment worldwide.

Francis made the change to the Catechism of the Roman Catholic Church, the book of doctrine that is taught to Catholic children worldwide and studied by adults in a church with 1.2 billion members. Abolishing the death penalty has long been one of his top priorities, along with saving the environment and caring for immigrants and refugees

A majority of the world’s countries — including nearly every nation in Europe and Latin America, regions that are home to large Catholic populations — have already banned the death penalty, according to Amnesty International.

The pope’s decree is likely to hit hardest in the United States, where a majority of Catholics support the death penalty and the powerful “pro-life movement” has focused almost exclusively on ending abortion — not the death penalty. The pope’s move could put Catholic politicians in a new and difficult position, especially Catholic governors like Greg Abbott of Texas and Pete Ricketts of Nebraska, who have presided over executions.

“If you’re a Catholic governor who thinks the state has the right to end human life, you need to be comfortable saying you’re disregarding orthodox church teaching,” said John Gehring, the Catholic program director at Faith in Public Life, a liberal-leaning advocacy group in Washington. “There isn’t any loophole for you to wiggle through now.”

The new ruling could also complicate the lives of American judges who are practicing Catholics.

President Trump’s nominee to the Supreme Court, Judge Brett M. Kavanaugh, is Catholic, as are Chief Justice John G. Roberts Jr. and Justices Clarence Thomas, Samuel A. Alito Jr. and Sonia Sotomayor. One of the other finalists for the vacancy created by the retirement of Justice Anthony M. Kennedy was Judge Amy Coney Barrett, who is also Catholic.

She wrote a 1998 law review article suggesting that Catholic judges should consider recusing themselves in some death penalty cases that might conflict with their religious beliefs.

The new teaching builds on the teachings of Francis’ two immediate predecessors. For example, in 1992, in the catechism promoted by John Paul II, who has since been canonized, the death penalty was allowed if it was “the only practicable way to defend the lives of human beings effectively against the aggressor.”

“This didn’t come out of nowhere,” said John Thavis, a Vatican expert and author. “John Paul II and Benedict laid the ground work; he’s taking the next logical step.”

“I think this will be a big deal for the future of the death penalty in the world,” he added. “People who work with prisoners on death row will be thrilled, and I think this will become a banner social justice issue for the church.”