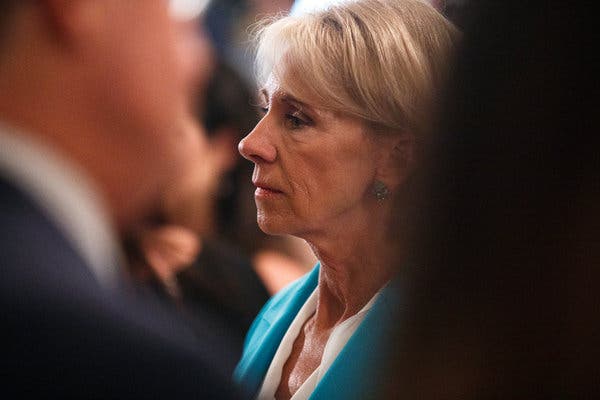 U.S.  Education Secretary Betsy DeVos proposed yesterday to curtail Obama administration loan forgiveness rules for students defrauded by for-profit colleges, requiring that student borrowers show they have fallen into hopeless financial straits or prove that their colleges knowingly deceived them.  The proposed regulations, set to go in force a year from now, would replace Obama-era policies that sought to ease access to loan forgiveness for students who were left saddled with debt after attending two for-profit college chains, Corinthian Colleges and ITT Technical Institute.  The schools were found to have misled their students with false advertisements and misleading claims for years.   In arguably the biggest change, the new proposal would require students applying for borrower defense would need to prove that their college had knowingly misled them. Under the previous rules, borrowers were entitled to forgiveness regardless of the college’s intent. Experts said the shift could make it nearly impossible for students to succeed in a borrower-defense claim, particularly as the department rolls back efforts to investigate predatory behavior.

“The issue is that they’re simultaneously raising the bar and lowering their ability to collect evidence that would support that bar,” said Clare McCann, deputy director for federal higher-education policy at New America and a former policy adviser in the Education Department. “Borrowers are going to be asked to have some kind of evidence before they apply, and I think that just ultimately, if the department isn’t doing those investigations, it’s not clear to me how anyone would ever have evidence of intent.”  As reported in the New York Times:

“Now the Trump administration is proposing new rules that would require borrowers to prove that they have fallen into deep financial distress to file a claim for debt relief, or to prove that the higher education institutions they attended had intentionally misled them. The department would also require that relief applicants divulge personal information that could have impacted their job prospects beyond their college experiences, including drug test results, health concerns and performance evaluations.

The proposal would establish a federal standard for what constitutes “misrepresentation” on the part of institutions, requiring that claims show “reckless disregard” through false or deceptive claims. It would also impose penalties on institutions that show signs of poor financial health, such as a high number of loan defaults or court judgments.”

The new rules lay out “clear rules of the road for higher education institutions to follow” while “holding institutions, rather than hardworking taxpayers, accountable for making whole those students who were harmed by an institution’s practices,” Ms. DeVos said in a statement. “Our commitment and our focus has been and remains on protecting students from fraud.”

These changes will only help predatory colleges and not students.  Critics accused Ms. DeVos of stocking her department with former executives of for-profit colleges and universities to free the industry from oversight. DeVos advisers include her senior counselor, Robert S. Eitel, and Diane Auer Jones, a senior adviser on postsecondary education, both of whom worked for Career Education Corporation, a company that operates for-profit colleges, and reached a $10.25 million settlement with the New York attorney general over charges that it had inflated graduates’ job placement rates. The department’s general counsel, Carlos G. Muñiz, worked as a consultant for the company.

“With the stroke of a pen, Secretary DeVos and her team of former for-profit college executives have proposed giving fraudulent institutions de facto immunity while effectively stripping their victims of a realistic path to debt relief,” said Aaron Ament, the president of the National Student Legal Defense Network.