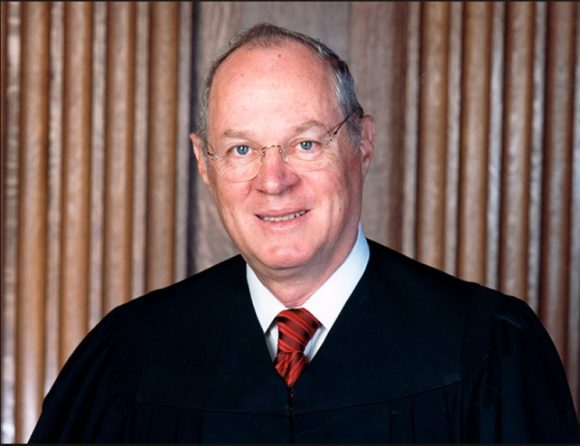 U.S. Supreme Court Associate Justice Anthony Kennedy announced this afternoon that he will step down from the bench on July 31.

“It has been the greatest honor and privilege to serve our nation in the federal judiciary for 43 years, 30 of those years on the Supreme Court,” he said in a statement, which noted that he chose to step aside to spend more time with his family.  As reported:

Kennedy, 81, has sat on the high court since 1988. The Ronald Reagan appointee is known for his frequent role as a swing vote on 5-4 decisions. In this Supreme Court term, Kennedy sided with the court’s conservative bloc in every one of the court’s 5-4 decisions.

With his departure, President Donald Trump is likely to appoint a more reliably conservative judge who will swing the balance of the court further to the right. Among the key issues at stake is the constitutional right to an abortion, as upheld in the Supreme Court’s 1973 decision in Roe v. Wade. With a conservative replacing Kennedy, anti-abortion activists are likely to shepherd a challenge to that ruling up to the Supreme Court.

Conservatives have long been preparing for Kennedy’s departure from the court and have been eyeing potential replacements since last year. Speaking shortly after Kennedy’s announcement, the president said his search for a nominee would begin immediately, and that he will choose a new judge from the list the White House circulated in November.

Trump’s team will press for Senate confirmation of a nominee prior to November’s midterm elections, when Democrats are hoping to take back control of the Senate, according to ABC.

Senate Majority Leader Mitch McConnell (R-Ky.) is unlikely to delay a confirmation vote due to this year’s election, according to a spokesman — as he did when former President Barack Obama nominated Merrick Garland to replace Antonin Scalia after his death in 2016.

Kennedy, who was raised in Sacramento, California, began his law career in private practice. He went on to teach law at the University of the Pacific’s McGeorge School of Law and served on multiple judicial boards and committees.

He became more prominent in the legal world after President Gerald Ford nominated him to the U.S. Court of Appeals for the 9th Circuit, on which he served until his appointment to the U.S. Supreme Court.

Kennedy leans conservative, but he has often broken with the court’s right wing in key cases, including in several landmark gay rights cases. He has been the deciding vote in some high-profile cases, including Citizens United v. Federal Election Commission, the 2010 ruling that rolled back some restrictions on campaign finance, and Boumediene v. Bush, in which the court found that Guantanamo Bay detainees have the right to appeal their detention.

Kennedy, however, has bristled at his “swing vote” reputation.

This is the biggest win of the day for conservatives.