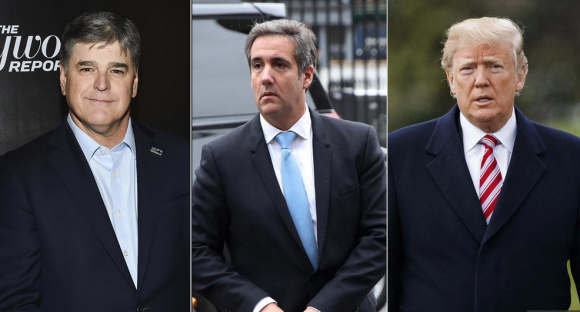 During a hearing at a packed courtroom in Lower Manhattan on Monday, Sean Hannity was named as a client of Mr. Trump’s longtime personal lawyer and fixer, Michael D. Cohen. This disclosure has raised a firestorm of ethical issues for the Fox News host.  As reported by the New York  Times:

“The revelation nudged the Hannity into the orbit of those who have lately come under legal scrutiny related to the investigations of Mr. Trump and his associates by the special counsel, Robert S. Mueller III, and the United States attorney’s office in Manhattan. Both inquiries have provided fodder for Mr. Hannity’s prime-time cable show and nationally syndicated radio program.

The host’s closeness with the president may not sit well with media watchdogs, but the cozy relationship has been good for the Hannity business: “Hannity” is the most-watched cable news program, averaging 3.2 million viewers in the first quarter of 2018, up from 1.8 million in the early months of 2016.

The courtroom disclosure about Mr. Hannity occurred during the expanding criminal investigation into Mr. Cohen by the United States attorney’s office in Manhattan. F.B.I. agents raided Mr. Cohen’s home, office and hotel room on the morning of April 9, a move that Mr. Trump called an “attack on our country.”

In a legal filing before the hearing on Monday, Mr. Cohen said that, since 2017, he had worked as a lawyer for 10 clients, seven of whom he served by providing “strategic advice and business consulting.” The other three comprised Mr. Trump, the Republican fund-raiser Elliott Broidy and a third person who went unnamed.

The mystery was solved when Kimba M. Wood, a judge for the United States District Court for the Southern District of New York, ordered that Mr. Cohen’s lawyer, Stephen Ryan, disclose the name of the client in question — who turned out to be Mr. Hannity.

Mr. Hannity denied on Monday that he was a client of Mr. Cohen’s, saying that he had never paid him for his services and that his discussions with him were brief and centered on real estate.

The surprise naming of Mr. Hannity took place after several minutes of back and forth among government representatives, members of Mr. Cohen’s legal team and Judge Wood.

Before the name was revealed, Mr. Ryan argued that the mystery client was a “prominent person” who wanted to keep his identity a secret because he would be “embarrassed” to be identified as having sought Mr. Cohen’s counsel.

Robert D. Balin, a lawyer for various media outlets, including The New York Times, CNN and others, interrupted the hearing to argue that embarrassment was not a sufficient cause to withhold a client’s name, and Judge Wood agreed.

After Mr. Hannity was named, there were audible gasps from the spectators.

The hearing on Monday resulted from a challenge by Mr. Cohen’s lawyers, who argued for the appointment of a “special master” to examine the records seized during the federal raid on April 9. The exact nature of Mr. Cohen’s work for Mr. Hannity is unclear.

On Fox News, the anchor Shepard Smith reported that his colleague had been named as a client of Mr. Cohen’s, saying that it was time for him to address “the elephant in the room.”

It is more like a herd of elephants in the room.