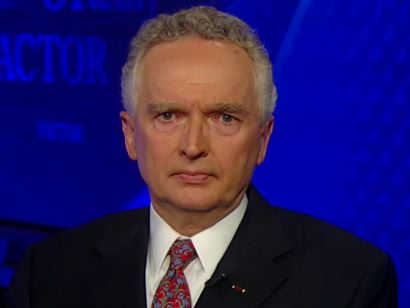 Ralph Peters. a retired U.S. Army officer, has been a long-time analyst for Fox News.  Yesterday he skewered the conservative media outlet in an email to colleagues explaining his decision to not renew his contract with the network.

“Four decades ago, I took an oath as a newly commissioned officer,” Peters wrote in the email, which was first reported by BuzzFeed. “I swore to ‘support and defend the Constitution,’ and that oath did not expire when I took off my uniform. Today, I feel that Fox News is assaulting our constitutional order and the rule of law, while fostering corrosive and unjustified paranoia among viewers. Over my decade with Fox, I long was proud of the association. Now I am ashamed.”

Peters continued: “In my view, Fox has degenerated from providing a legitimate and much-needed outlet for conservative voices to a mere propaganda machine for a destructive and ethically ruinous administration.”

Fox News, in a statement to The Hollywood Reporter, said: “Ralph Peters is entitled to his opinion despite the fact that he’s choosing to use it as a weapon in order to gain attention. We are extremely proud of our top-rated primetime hosts and all of our opinion programing.”

Peters, who opined about military issues and international policy on television and online, criticized the network’s primetime lineup for, in his words, attacking the integrity of the FBI and of special counsel Robert Mueller. He also accused network talent of embracing Russian president Vladimir Putin’s agenda.

“To me, Fox News is now wittingly harming our system of government for profit,” Peters wrote in the email. He gave a pass, though, to Fox Business Network, calling the network’s staff and hosts “the grown-ups.”

Strong words from someone who was an insider at Fox News!