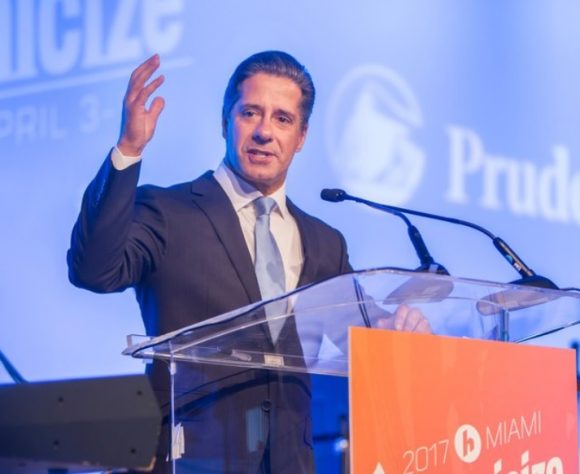 NOTE: Mr. Carvalho accepted and then declined the NYC Schools Chancellor’s position the next day.

Mr. Carvalho will oversee the nation’s largest system, one made up of 1.1 million children, many of whom face similar challenges to those he has overcome. Over 70 percent of New York City students come from families that are on some form of public assistance, and one in every 10 students was homeless at some point in the 2016-17 school year.  As reported by the New York Times:

“Mr. Carvalho, 53, has led Miami-Dade, the nation’s fourth-largest district, for nearly a decade and has a remarkably successful record. The high school graduation rate has increased to 80.7 percent in 2016-17 from 60.5 percent in 2007-8. In 2014, Mr. Carvalho was named the National Superintendent of the Year. In 2012, the district won the Broad Prize for Urban Education, which recognizes districts that have shown major gains in student achievement.

“Alberto Carvalho is a world-class educator with an unmatched track record of success,” Mr. de Blasio said in a statement on Wednesday evening. “I am very confident that our extensive, national search has found New York City the best person to lead the nation’s largest school system into the future.”

Mr. Carvalho’s national profile is higher than that of Mr. de Blasio’s current schools chancellor, Carmen Fariña, when she was appointed four years ago, and he is seen as politically savvy and ambitious…

Mr. Carvalho has pushed expanding the number of charter, magnet and other choice schools and programs, and promoting the use of technology in the classroom. He started a school called iPreparatory Academy where students work at their own pace, partly led by teachers and partly using online curriculum…

Shortly before Mr. de Blasio made his announcement on Wednesday, the Miami-Dade school board called an emergency meeting for Thursday morning “to discuss the stability of the executive management leadership.”

After Mr. de Blasio made his statement, a spokeswoman for Mr. Carvalho, Daisy Gonzalez-Diego, said only that he had been offered the job but had not accepted and would not comment until after he had met with the board.

In an unusual move, rather than scheduling a public announcement of the chancellor pick, the mayor’s office said that Mr. de Blasio had no scheduled events on Thursday.

Randi Weingarten, the president of the American Federation of Teachers, said that, despite leadership at the state government level in Florida that she described as “overtly hostile to public education,” Mr. Carvalho “has had an open door towards educators and toward partnership and teamwork and has been able to move the Miami-Dade system because of that.”

Mr. Carvalho grew up poor in Lisbon, Portugal, and was the first in his family to graduate from high school. At the age of 17, he flew to New York on a visa that he then overstayed. In New York, he washed dishes and worked as a busboy in restaurants. He made his way to Florida, where he worked in construction. He has said that at one point he spent a month being homeless, sleeping in a friend’s U-Haul truck. In a restaurant where he worked as a waiter, he met Representative E. Clay Shaw, a Republican congressman from the area, who helped him gain a student visa.

Mr. Carvalho has spent his entire career in the Miami-Dade school system, starting as a teacher at Miami Jackson Senior High, where he taught physics, chemistry and calculus. He went on to become an assistant principal, a lobbyist for the district, and an associate superintendent. He took over the district from Rudy Crew, himself a former New York City schools chancellor.

He has been an outspoken critic of President Trump’s immigration policies and defender of undocumented immigrants.”

We wish Mr. Carvalho good luck in his new position and thank outgoing chancellor, Carmen Fariña, for a job well-done.