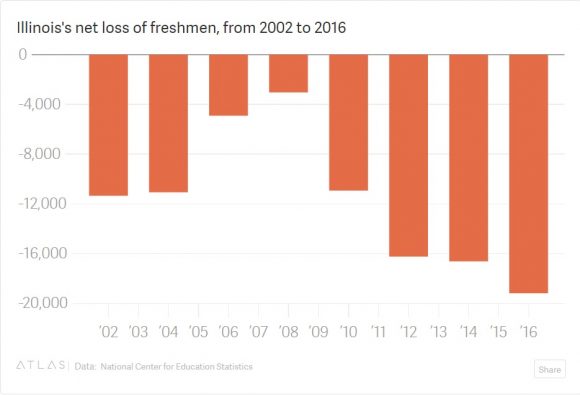 First-time freshmen enrollment at Illinois public colleges and universities has been plummeting thanks in part  to Governor Bruce Rauner’s engagement in a bruising two-year budget battle with the Democratic-controlled legislature that led to furloughs, layoffs, and emergency measures. A Chronicle of Higher Education article suggests budget worries have created unease among prospective Illinois students about the long-term health of their home-state higher-ed options. As per the article:

“For the fourth straight year, the University of Illinois system has frozen tuition for in-state students at its three campuses. Announcing the move in January, the system’s president, Timothy L. Killeen, was explicit about its purpose: to stop the hemorrhaging of Illinois residents enrolling at out-of-state colleges and universities.

Many have laid the blame for that exodus at the feet of state leaders. A bruising budget stalemate between Illinois’s Republican governor, Bruce V. Rauner, and the Democratic-controlled legislature, stretching from 2015 to 2017, led to furloughs, layoffs, and emergency measures at several Illinois public colleges. Some observers say the affair created unease among prospective Illinois students about the long-term health of their home-state higher-ed options.

Sure enough, since the impasse began, enrollments at many Illinois public universities have slid precipitously from year to year. (Just this fall, freshman enrollment at Western Illinois University fell by 21 percent.) And preliminary data indicate that a greater number of freshmen sought higher education outside the state, while fewer out-of-state students chose to study in the Land of Lincoln. In 2016, the state experienced a net loss of 19,195 students, a 15-percent increase from 2014’s 16,000-student gap, and second only to New Jersey’s 29,000-freshmen deficit. The deepening loss was largely driven by more Illinois residents seeking to study in other states.

But the fact is that Illinois has been losing students long before its budget mess. In both 2012 and 2014, before Governor Rauner’s election, around 33,000 Illinois residents attended college as freshmen outside the state. The state filled only about half of that deficit with the enrollment each year of about 17,000 out-of-staters. Over the last decade, Illinois has averaged a net loss of 8,000 freshmen in each of the five years that data were collected. (The federal government surveys colleges about freshman-migration patterns only in even-numbered years.)

In fiscally stable times, that migration deficit might have been problematic, but it wasn’t dire. But the budget stalemate exposed and exacerbated a long-running problem: Without regular and certain state funding, public and private colleges needed to enroll more Illinois residents to raise much-needed tuition revenue. However, the uncertainty created by the impasse led more students to take their dollars elsewhere. Hence, as a last resort, the years of tuition freezes.

The feedback loop of uncertainty that Illinois has been stuck in is relatively new, and pressing. But researchers say the broader phenomenon of freshman migration has been present for decades.

“You can trace it back to the 1960s,” said Eric Lichtenberger, deputy director of information management and research at the Illinois Board of Higher Education. “It’s nothing new. It’s been going on for the past 50 years or so.”

The best way for Illinois to keep its students in state might have little to do with tuition discounting or recruitment strategy, said Larry A. Isaak, president of the Midwestern Higher Education Compact. A year or two without pessimistic headlines about the state of public higher education could make a real difference in Illinois.

“Students are reading newspapers and watching news programs on television,” said Isaak. “They look at what is happening. And so I would advise certainty in budgets and certainty in financial-aid funding.”

A sad situation for what has historically been a great public university system.