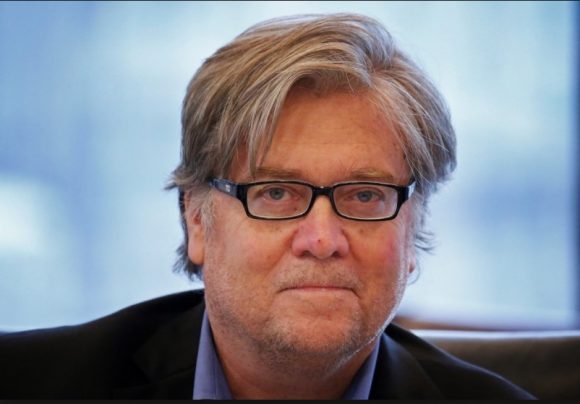 Steve Bannon, Donald Trump’s chief campaign and White House strategist, gave an interview to Vanity Fair that was published last week.  He had choice words for Trump and several key people close to Trump including his daughter, Ivanka, and her husband, Jared Kushner.  Here are several excerpts from the interview.

“The Trump presidency that we fought for, and won, is over,” he told writer Gabriel Sherman, and reportedly told a friend last month that he believes the president has “lost a step” and that he is “like an 11-year-old child.”

Bannon saved several of his most vicious comments for Ivanka Trump and Jared Kushner and derided the couple as “Javanka”.  He said Ivanka was a “fount of bad advice during the campaign,” and claimed he once called her to her face “the queen of leaks.”

Vanity Fair reported Bannon considers Kushner an elitist with no political experience who is in over his head and is out of touch with Trump’s constituency.

“He doesn’t know anything about the hobbits or the deplorables,” Bannon said. “The railhead of all bad decisions is the same railhead: Javanka.”

He said it was Kushner who encouraged Trump to fire FBI director James Comey. “It’s the dumbest political decision in modern political history, bar none,” Bannon insisted, calling it a “self-inflicted wound of massive proportions.”

He also had comments about George W. Bush, Mitch McConnell, and Jeff Sessions.

“As the White House sinks deeper into scandal, along with Roy Moore’s crushing defeat, it’s hard not to see Trump and Bannon as survivors huddled together on a shrinking spit of dry land. Meanwhile, with 2018 looming, even Bannon recognizes the Democrats’ growing strength. “The reason the Democrats did so well in Virginia is because they’re angry. Anger gets people to do things. I admire that,” he said.

During one conversation this fall, Bannon seemed to accept that his campaign might not succeed. But he said people are mistaken if they equate losing elections with failure. “I’m not a political operative,” he said, “I’m a revolutionary.”

An interesting interview by someone who was very close with Donald Trump.