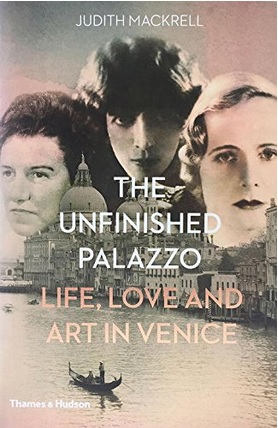 I have just finished reading Judith Mackrell’s book, The Unfinished Palazzo:  Life, Love, and Art in Venice (Thames & Hudson, 2017).  This book focuses on three women, Luisa Casati, Doris Castlerosse, and Peggy Guggenheim, each of whom lived in the Palazzo Venier in Venice. The 18th-century palazzo is nicknamed Ca’ Nonfinito, “the unfinished house,” because only the ground floor was built before the funding for the construction ran out.  In telling the stories of these eccentric women, Mackrell brings the reader into the turbulent times of 20th century Europe:  Marchesa Luisa Casati, from Milan, an exhibitionist who considered her life (and especially her person) to be a work of art; Doris, Lady Castlerosse, an Englishwoman whose lovers included both Winston Churchill and his son, Randolph; and Peggy Guggenheim, the American art patron who bequeathed the mansion to her family’s foundation as a museum of modern art.

Here is an excerpt from a review by Gabriella Coslovich:

“To this day, the exploits of Luisa Casati (the heiress), Doris Castlerosse (the mistress) and Peggy Guggenheim (the collector) have the power to shock, dismay and inspire in equal measure – each refused to conform to traditional female roles, and while their behaviour was not always admirable (and at times borders on the abominable) their courage in facing the misogyny and double-standards of their times and forging their own path is thrilling.

Much has been written about Casati and Guggenheim (who penned her own memoir), less so about Castlerosse – although her connection to contemporary English model and actress Cara Delevingne, herself no slouch in courting controversy, has prompted a revival of notoriety, with the tabloids excitedly pouncing on “Cara’s VERY naughty aunty!”, seductress of Winston Churchill.

Using the device of their shared palazzo on the Grand Canal, Mackrell seamlessly weaves together the stories of these three women, drawing parallels between their overlapping lives and cultural milieu, creating an account that is as much riveting social history as biography.”

I found the stories of these women most interesting partially because I have visited the Palazzo Venier which houses Guggenheim’s modern art collection but also because of the background of 20th century Europe during World War I, the Great Depression, the rise of fascism, World War II and its aftermath.  Peggy Guggenheim’s story also provides insights into the New York City modern art scene in the 1940s and early 1950s.