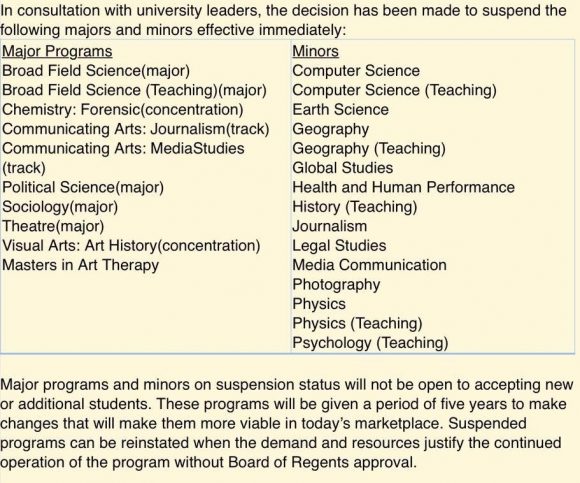 The Chronicle of Higher Education is reporting that the University of Wisconsin at Superior announced earlier this week it will be phasing out two dozen academic programs over the next five years. As reported:

“Faculty members at the University of Wisconsin at Superior said they were “blindsided” by this week’s announcement that the university was suspending more than two dozen academic programs, including majors in political science, sociology, and theater.

The programs were being phased out, the university said, as part of a streamlining process to make it easier for students to graduate on time. First-generation students, who make up 46 percent of the student body, tend to get overwhelmed by too many course offerings, university administrators said. As a result, they added, students often make bad decisions that cause them to take too many credits, incur too much debt and take too long to graduate.

No new students will be admitted into the suspended programs, but students who have already declared majors or minors will be able to finish them, the university’s announcement said.

Despite the $2.5-million deficit facing the university, the primary motivation for the suspensions was student success, not cost-cutting, administrators said.

The suspensions, which also include minors in computer science, physics, and journalism, were announced Tuesday morning at a department chairs meeting and then quickly posted on the university’s web page. The move surprised many in academe and prompted a backlash from faculty members who said they weren’t consulted first.

“Half of the offerings in my department were cut without any discussion or notification,” said Brent Notbohm, a professor of film and video and chair of the Communicating Arts Department.

“It’s left people demoralized and feeling like they didn’t have an opportunity to work with administrators to find pragmatic solutions.”

No faculty members will be laid off as a result of the suspensions, but several faculty members interviewed said they expected some of their colleagues to leave as their programs shrink.”

Contrary to what the university administrators are saying, this action seems more like cost-cutting than a student success issue.