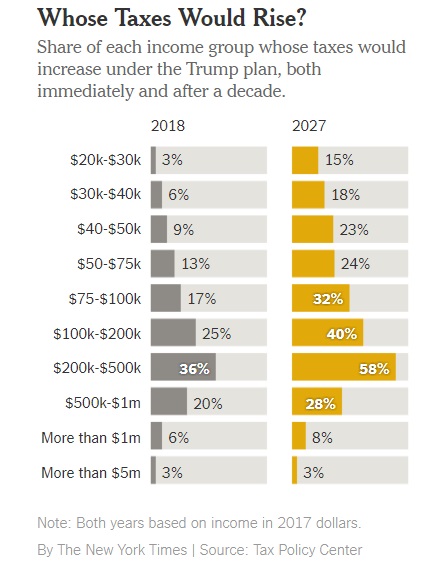 We have been hearing a great deal about the tax plan being proposed by the Republicans and Donald Trump.  New York Times columnist, David Leonhardt provides an analysis that puts most of the benefits on the side of the wealthy.  Leonhardt gets into the weeds a bit and unless you are a CPA or a very careful follower of the language of tax codes and deductions, it gets complicated.  The graphic above developed by the Tax Policy Center is fairly clear on what this tax plan will mean for Americans at different income levels. Leonhardt summarizes this analysis as:

“To understand the Trump tax increases, you should first acknowledge the most admirable feature of his plan. It doesn’t aspire to be merely a tax cut. It aspires to be tax reform — both cuts and increases. Some deductions shrink, while rates fall, in the name of simplifying the tax code.

But after this promising start, the plan commits its cardinal sin. It places the highest priority on huge tax cuts for the very wealthy. They get lower rates and get to keep cherished tax breaks, like the “carried interest” loophole. Herbert Hoover’s Republican Party wanted to put a chicken in every pot. Donald Trump’s wants to put a yacht at every private dock.”

On the issue of the trickle-down benefits of tax breaks for the wealthy, Leonhardt comments:

“Trump and his allies are feverishly trying to claim their plan really would benefit the middle class. Their latest talking point is the notion that corporate tax cuts will create an indirect windfall for workers. Funny, though, how the wealthy get most of the direct benefits, while everyone else has to hope for indirect ones somehow to materialize.”

The column is worth a read.