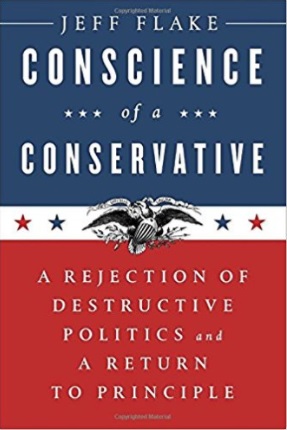 I just finished reading Senator Jeff Flake’’s Conscience of a Conservative that was published earlier this year.  It is a thin volume by the Republican from Arizona that borrows from Barry Goldwater’s book of the same title published in 1960.  Flake readily admits that he was always a big Goldwater fan and credits his own conservative views to him.  This becomes the basis for his strong disagreement and distaste for the way Donald Trump is handling the presidency.

Flake makes the case that Trump is not conservative or really a Republican.  His stances on free trade and globalization for instance are anathema to core, free-market conservative values.

Flake also takes strong issue with Trump, the president.  He characterizes him as volatile and a destabilizer who is more television reality star than statesman. Without a doubt, he clearly sees Trump as a danger to our country, its values, and to conservatism.

Although not a great insight, I did enjoy reading Flake’s book this week as we saw Trump strike a major legislative deal with the Democrats.  It exemplified Flake’s assertions that Trump is not a Republican.  However, I am a bit dismayed that while Flake has written this book in part because he is fighting a major election challenge for his Senate seat, he has also consistently voted for all the agenda items that Trump has been pushing the Senate to move on.  So he disagrees with Trump and sees him as a danger to the country but still supports him as a party loyalist.  A bit of hypocrisy here.