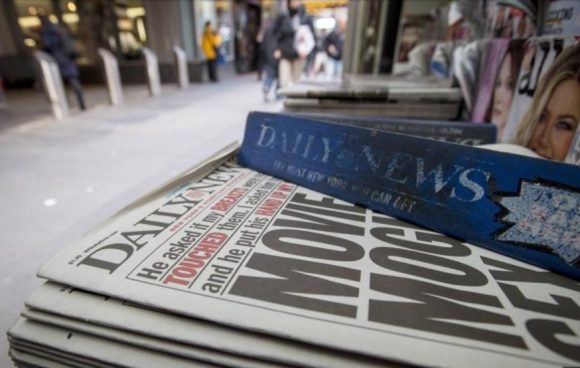 It was announced yesterday that the New York Daily  News was acquired  by Tronc, the publisher of The Los Angeles Times and The Chicago Tribune.  The Daily News has been one of the mainstays of New York City with its gossip, sports and city coverage for ninety-eight years.  It was the newspaper that you were most likely to see people reading in the subways during rush hours.  As reported:

“The deal represents the end of an era for The News, which was long a voice for New York’s working class. It may also signal the end of the political influence of its owner, the real estate magnate Mortimer B. Zuckerman, who often used the paper’s bold, front-page headline — known as “the wood” — for commentary about candidates and politicians, locally and nationally.

The News once boasted A-list columnists including Liz Smith, Jimmy Breslin and Pete Hamill, but it has been worn down by a grinding tabloid war with the Rupert Murdoch-controlled New York Post. And like the rest of the newspaper industry, The News has been battered and bruised by the Internet Age, when the equivalent of pithy headlines — a staple of The News — come a mile a minute on Twitter.

Sweeping layoffs have reduced its staff. The paper’s circulation, which exceeded two million a day in the 1940s, is now in the low hundred thousands. And The Chicago Tribune reported on Monday that Tronc purchased The News for just $1, plus the assumption of liabilities.

But while The News wields less influence than it once did, it still has the power to resonate in the city and beyond. This year, the paper and ProPublica shared the Pulitzer Prize for public service for a series on the New York Police Department’s widespread abuse of eviction rules. And its pointed headlines, particularly about President Trump — a longtime real estate rival of Mr. Zuckerman — still attract attention, particularly on social media.

“The New York Daily News is a venerable New York City institution,” Eric Gertler, the co-publisher of The News, said in a statement. “We believe that under Tronc’s leadership, The New York Daily News will maintain its tradition of excellence in journalism and continue to be a critical voice for millions of print and online readers.”